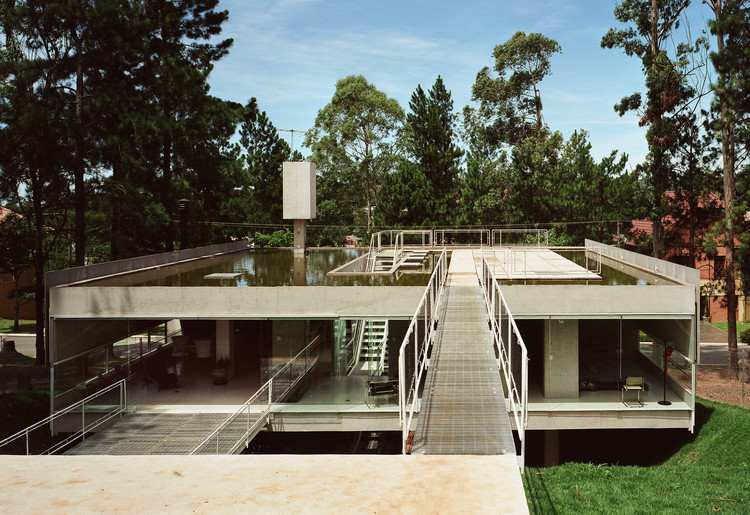 Text description provided by the architects. The site’s topography has a 20% slope, which means exactly 8 m difference between lowest and highest points. A 16 m square-shaped house was spotted in a single store above the inclined topography. In such a way that it results in two equal additional useful spaces: under and over it, like a yard in the shadow and another one in the sun, places to stay outdoor either in a rainy or a sunny day. Due to the slope, from any of the three levels we can always reach the ground at the same level, even on the roof we can cross a bridge and find the ground level again.

The house structure rests on four columns. The two waffles slabs — 50 cm high including all the beams that stand each 90 cm — were made by casting premixed concrete on plastic mold. Although the structure construction has been done on spot, its process is very industrialized.

The house’s roof has a 20 cm depth pool as a reflecting pool. The water was poured when the slab had just been cast avoiding cracks due to the heating during the cure process. Also by keeping the water we also avoid cricks from sudden variation of temperature. By this way the concrete become impermeable by itself, it means free from membrane and thermal insulation.

The external walls are made in concrete and they have only 5 cm of thickness. Then, to improve its thermal performance we had to protect them with a second layer, made with pre-cast panels out of pressed wood and cement.

The side windows were made with tempered glass without frameworks, they are like a guillotine balanced with a counterweight hidden between the panel and the wall of concrete. 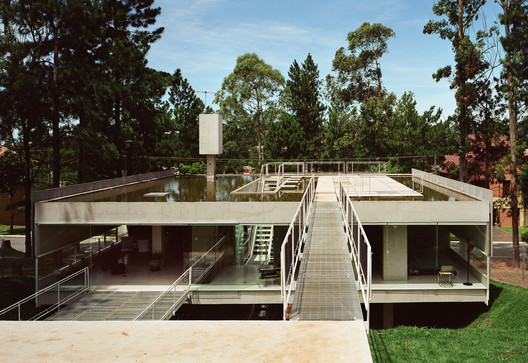