Patrick Bateman’s apartment from American Psycho is one of the most iconic locations in recent film history – his bone-white business card writ large. The sterile set design, by Gideon Ponte, is as impersonally creepy as Christian Bale’s performance (sure, put a telescope by the window, why don’t you; a serial killer without voyeurism just isn’t scary enough.) Archilogic’s interactive 3D model invites you to experience the apartment from the inside – without fear of an axe to the head.

The film’s satire rests heavily on materialism and superficiality, Bateman’s status anxiety elevated to existential terror and psychosis. So naturally, his own living space – it’s hard to call it a home – is subject to the same inhuman perfectionism. From a Mackintosh chair to Mies van der Rohe’s Barcelona suite, every desirable piece adds to his armor of success. But in this extreme minimalism, without any trace of personality on show, the space feels hollow and empty. Even the Robert Longo artworks – oversized, black and white, and off-balance – add to the unsettling vibe.

Is this cold, hard atmosphere intrinsic to Eighties Manhattan style? In other hands, the kitchen – with its inviting window into the living room – could be a convivial space, a social focus. In Psycho, it’s the almost industrial, stainless steel backdrop to butchery (bet you don’t remember any actual eating taking place in that kitchen; the fridge is just a decapitated head storage system). The all-white bedroom, instead of a pristine place of rest, is a surgical theater. And yet, on its own merits, it’s a desirable apartment. Take a tour and try humanizing it with your own choice of furnishings... Blood not included.

Start the tour above, or via this link. The animation will guide you through different spaces in Patrick Bateman’s apartment. 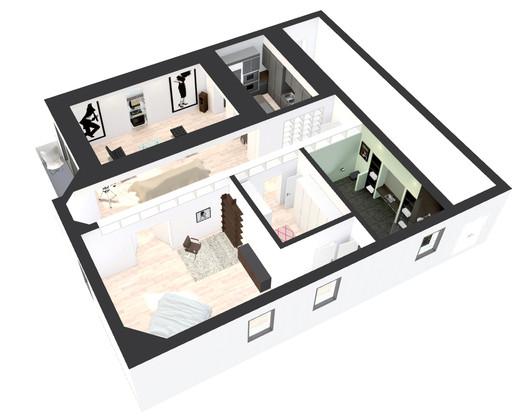