Save
The Treehouse / Wee Studio 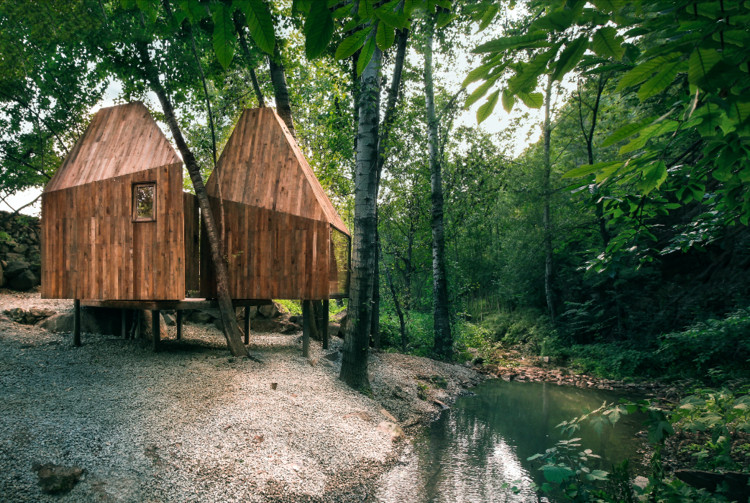 Text description provided by the architects. The Treehouse is located in a little woods of poplar and hawthorn trees, where is at the foot of Mount Wuling in Miyun, Beijing. The cliff on the north with a stream meandering under it, and a mountain spring running in all seasons together create a quiet and peaceful environment for the Treehouse. There are two parts of the building, a deck and two separated polyhedrons the function of which are tearoom and bathroom. The inside of the tearoom is floored with Tatami, and the space is designed to serve as tea drinking in the daylight and sleeping as well as at night.

The building of Treehouse is a practice of Wee Studio about the subtle relationship between nature and inhabitation, as well as an exploration about how to achieve the architecture in the era of internet now. At the end of 2015, we initiated a crowdfunding on the Internet which had a great response in a short time. More than just about building a Treehouse on our own, the practice is more about inviting more people with same interests into the process of design and construction and having fun with it.

Going down through the steps from the door of a backyard, you would see the Treehouse floating in trees at the side of a stream. And then you have to climb onto a rock growing from the ground to achieve the deck.

The full size glass to the floor brings the view of trees and cliff in the tearoom, where you can read, rest, drink and even encounter with squirrels sometimes.

You can enjoy the shadow of trees and leafs as well as the sky if lying down.

The Treehouse is equipped with thermal insulating layer and heating system to ensure normal operation in winter, in which you can enjoy another different view of the beautiful mountain area.

While the north floor window brings the view in, a small window on the west side leads people to the small woods outside far away. The skylight at the end of the sloping ceiling introduces the light into the room, so that you can lying on Tatami and look to the nature with sky and trees outside which makes the small room felt bigger and higher. Through the study of window layout and human body size, we avoid the feeling of cramp in such a small interior space and make a conversation with the nature in a subtle way.

The Treehouse is interlocking with five poplar trees and two hawthorn trees.

The Treehouse is a space where you can communicate with mountain, trees, the sky and stream.

The main structure of the Treehouse is steel frame. We prefabricated all the structures in factory and transported them to be assemble on site to ensure the precision of the irregular form. The facade is installed with recycled wood panels in 60mm width, on which the trace of time makes the building blending into the environment.