The skyscraper: representative of spatial economy and a symbol of power. This building typology has a storied, turbulent and even contested past. Here, we bring you a selection some of the skyscrapers and high-rise buildings featured in our AD Classics section.

Among the first skyscrapers built in the world, the Wainwright Building by Louis Sullivan and partner Dankmar Adler is regarded as an influential prototype of a modern skyscraper design. The building aesthetically exemplifies the theories of Sullivan's tall building, with the tripartite composition of base, shaft and attic, which is based on the structure of the classical column. Its construction system is based on a steel frame that is clad in masonry and is credited for being the first successful utilization of steel frame construction.
Read more about the Wainwright Building

The Woolworth Building, an innovative and elegant early skyscraper completed in 1913, endures today as an iconic form on the New York City skyline. A historicist exterior sheaths a modern steel tower, embodying both the era’s modern spirit of progress and its hesitation to fully break from the past. An ornate monument to the growing economic dominance of New York City, the building was dubbed the “Cathedral of Commerce.” While initially envisioned as the tallest structure in its neighborhood at 45 stories at 625 feet tall, the final design grew to 60 stories at 792 feet tall, making it the tallest building in the world at the time of its completion.
Read more about the Woolworth Building

Ville Radieuse (The Radiant City) is an unrealized urban masterplan by Le Corbusier, first presented in 1924 and published in a book of the same name in 1933. In accordance with modernist ideals of progress (which encouraged the annihilation of tradition), The Radiant City was to emerge from a tabula rasa: it was to be built on nothing less than the grounds of demolished vernacular European cities. Though radical, strict and nearly totalitarian in its order, symmetry and standardization, Le Corbusier’s proposed principles had an extensive influence on modern urban planning and led to the development of new high-density housing typologies.
Read more about Ville Radieuse

The Chrysler Building by William Van Alen is identifiable from great distances thanks to its distinguishable style and profile in the New York City skyline. Standing 319.5 meters (1048 feet) high, the Chrysler Building houses 77 floors. Its patron intended for it to be the world's tallest building, but it only remained so for eleven months (until it was surpassed by the Empire State Building) in 1931. The Chrysler Building is a classic example of the Art Deco style, with distinctive ornamentation based on features found on Chrysler automobiles at the time.
Read more about the Chrysler Building

A corporate commitment to innovation combined with Wright’s penchant for visionary design, yielded a pioneering yet challenged structure. An expansion of the company headquarters adjacent to the Wright-designed Administration Building from a decade earlier, the tower design expanded on the architect's visions for modern workspace and biomimetic structural systems. Floor slabs cantilever from a reinforced concrete “taproot” core, and bands of brick and crystalline glass tubes enclose laboratory spaces. Reverently maintained yet mostly unused by the SC Johnson company today, the tower can be considered either form pursued at the expense of function or a daring architectural accomplishment.
Read more about the SC Johnson Wax Research Tower

Located in the heart of New York City, the Seagram Building designed by Mies van der Rohe epitomizes the elegant principles of modernism. The 38-story building on Park Avenue was Mies' first attempt at tall office building construction. Mies' grand gesture with the Seagram Building was to set back the building 100 feet from the street edge, creating a highly active open plaza. The detailing of the exterior surface was carefully determined by the desired exterior expression Mies wanted to achieve. Additional vertical elements were also welded to the window panels not only to stiffen the skin for installation and wind loading, but to aesthetically further enhance the vertical articulation of the building.
Read more about the Seagram Building

In contrast with its traditional Milanese surroundings, the Pirelli Tower is one of the earliest examples of Modern skyscrapers in Italy. Affectionately called "Il Pirellone” (The Big Pirelli), the 127 meter tower stood as Italy’s tallest building from 1958 to 1995. The design of the structure, led by architect/designer Gio Ponti and engineer Pier Luigi Nervi, featured a tapered plan—as opposed to the conventional rectilinear volume which was prevalent in America—encouraging greater creative freedom during a time when skyscrapers typically lacked experimentation. Ponti’s slim, 33-story structure appears to shoot up from the ground like a missile, towering over its low-rise context. Centrally located on the project site, the tower is pushed away from the streets.
Read more about the Pirelli Tower

Completed in 1961, the 60 story skyscraper by Gordon Bunshaft of SOM is a coming of age story for Skidmore, Owings, and Merrill's presence as a national leader of corporate architectural design that evokes efficiency and functionality. Rising 813 feet above the bustling streets of Manhattan, the slender tower only occupies 30% of the 2.5 acre site. The building employed the most readily available and economic materials that were present at the time of construction and is clad in anodized aluminum with a glass and steel facade system.
Read more about Chase Manhattan Plaza

Built in 1964 during his tenure as Dean at the Graduate School of Design, Josep Lluís Sert’s Peabody Terrace provides housing for almost 1500 Harvard graduate students and their families. One of several projects Sert designed for Harvard’s campus, it is a manifestation of his vision for the ideal neighborhood. Many elements such as the negotiation of scale, mixed use program, shared open space and design aesthetic were influenced by but represent a departure from earlier modern housing projects. Peabody Terrace is a prototypical example of a twentieth-century project heralded by the architectural community as an exemplar of progressive modern ideals, but lambasted by neighbors and members of the general public for being unattractive, cold and imposing. Three-story volumes at the perimeter step up to five and seven stories towards the interior. This lower composition of masses is punctuated by three 22 story towers. The gradation in height relates to the adjacent low-rise residential context while also providing the greater density required by the university’s demand for housing.
Read more about Peabody Terrace

Although it is not as widely recognized as the Sears Tower or the John Hancock Building, Marina City’s distinctive “corn-cob” shape has a strong presence among modern architecture, as well as Chicago’s skyline. The architect, Bertrand Goldberg, thoroughly believed that people wanted to live in downtown Chicago. His approach to Marina City was to design a “city within a city” that could fully accommodate people’s everyday needs and activities just a short distance from their homes. It was a method of bringing suburban commodities and ease of access to an urban setting.
Read more about Marina City

Built in 1967, the building was the first spatial realization of Tange’s Metabolist ideas of organically-inspired structural growth, developed in the late 1950s. The Shizuoka Press and Broadcasting Center is far more significant than its relatively small size would suggest, encapsulating the concepts of the new Metabolistic order in architecture and urban planning that prevailed in post-World War II Japan.The infrastructural core was a 7.7 meter diameter cylinder, reaching a height of 57 meters, containing stairs, two elevators, and a kitchen and sanitary facilities on each floor. The core served as an access shaft to the modular office units: cantilever glass and steel boxes of 3.5 meters which punctuated the main core on alternating sides.
Read more about the Shizuoka Press and Broadcasting Center

Towering over the windy city of Chicago, the Willis Tower (formerly known as Sears Tower) was once the tallest building in the world upon its completion in 1973. The "bundled-tube" configuration was innovated by engineer Fazlur R. Khan from SOM, and these nine tubes formed the skyscraper's basic structure. This system allowed for large open office spaces on the lower levels (where the Sears offices would be located) and smaller floors as the building soared in height with unobstructed views of the city.The structural system also saved ten million dollars in steel costs.
Read more about the Willis Tower (Sears Tower)

A New York City icon that once rivaled structures such as the Statue of Liberty and the Empire State Building, the World Trade Center, colloquially known as the Twin Towers, was one of the most recognized structures in history. Designed by Japanese-American architect Minoru Yamasaki, it held the title of Tallest Building in the World from 1972–1974. Up until its unfortunate demise, the WTC site was a major destination, accommodating 500,000 working people and 80,000 visitors on a typical weekday. The facility was envisioned as a physical expression of world peace and as a place for communication, information, proximity, and face-to-face convenience for a variety of business and financial stakeholders. The two 110-story skyscrapers primarily housed open office space, but also included an underground parking lot for 2000 cars, a tall lobby, and an observation deck. The towers shared a simple plan: a 208-foot by 208-foot square with slightly chamfered corners surrounded an 87-foot by 135-foot core that was comprised of 47 steel columns.
Read more about the World Trade Center

In a city of skyscrapers of nearly every shape and size, the Citigroup Center on Lexington Avenue is one of New York’s most unique. Resting on four stilts perfectly centered on each side, it cantilevers seventy-two feet over the sidewalk and features a trademark 45-degree sloping crown at its summit. The original structure responsible for these striking features also contained a grave oversight that nearly resulted in structural catastrophe, giving the tower the moniker of “the greatest disaster never told” when the story finally was told in 1995. The incredible tale—now legendary among structural engineers—adds a fascinating back-story to one of the most iconic fixtures of the Manhattan skyline. To keep it hyper-efficient and low on mass, the finished structure was built to a minimal safety factor, a decision that would eventually come to haunt the engineers.
Read more about Citigroup Center

It may be the single most important architectural detail of the last fifty years. Emerging bravely from the glassy sea of Madison Avenue skyscrapers in midtown Manhattan, the open pediment atop Philip Johnson and John Burgee’s 1984 AT&T Building (now the Sony Tower) singlehandedly turned the architectural world on its head. This playful deployment of historical quotation explicitly contradicted modernist imperatives and heralded the mainstream arrival of an approach to design defined instead by a search for architectural meaning.While the building’s most iconic feature may be its “Chippendale Top,” a moniker it acquired for the pediment’s resemblance to the furniture maker’s classic highboy chests, perhaps the formal elements most illustrative of Postmodern sensibilities occur 647 feet below at ground level. There, a soaring entrance portico suggestive of great Italian arcades immediately removes visitors from the modern Manhattan neighborhood.
Read more about the AT&T Building (now the Sony Tower)

The design of PPG Place, by Philip Johnson and John Burgee, melds the notion of the modern corporate tower with a neo-gothic monument. It is a cluster of 6 volumes: a 40 story tower, a 14 story volume, and four 6 story buildings. The composition of lower volumes negotiates the verticality of the main tower and the lower surrounding context, yet all buildings are materially integrated and organized around a central plaza. Clad in almost a million square feet of glass manufactured by the anchor tenant PPG industries, the architects ingeniously rethought accepted practices in curtain wall design. The 1.57 million square foot complex was one in a series of high profile corporate projects completed during Johnson's controversial foray into postmodernism.
Read more about PPG Place 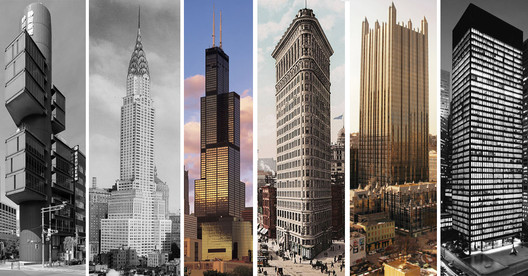