Save
11 Historical Examples of How to Design Doorways, as Selected by Sketchfab
Share
Or
Copy

Our friends at Sketchfab have noticed a recurring trend: among the many 3D scans shared on their platform, a significant number are of historical doorways. Often neglected in today’s designs, doors and doorways are essential physical and mental transition points between the interior and the exterior of a building. While Mies van der Rohe’s strive for visual continuity and the use of glass doors has some critical advantages, it is not applicable – or only poorly applicable – to every design case. Fortunately, history shows that visually and spatially differentiating doors and doorways from the rest of a facade can be a resourceful alternative.

With this set of 3D models selected by Sketchfab, viewers can explore historical doorways online and discover the spatial sequences that they can offer. From framed, indented, raised, lowered, protruding and ornamented doors, these models clearly showcase the various design strategies available for you to keep your doorway design options open.

One of the most popular options is to frame doors with classical architectural elements. This approach, that became increasingly popular in the Quattrocento, is well exemplified at the Florence Baptistery, where Lorenzo Ghiberti’s well-known eastern doorway – the “Gates of Paradise" – is framed by two composite columns and an entablature. The doors, made of bronze, have been gilded at their center where 10 biblical scenes are represented. The exposed bronze on the doors’ edges acts as a dark-colored frame that is complemented by the use of dark stones for the capitals and entablature.

A similar technique of framing is used at the Colonial Bank Doorway in Melbourne, where two telamones (male column-figures) are placed on each side of the arched entrance.

Framing can also be made with several pairs of columns to give an entrance depth and perspective. From the outside to the inside, columns shift inwards and form horizontal indents. They are also usually superposed with successive round arches, as seen on this Roman door.

With this technique, the recessed doorway becomes an increasingly important focal point of a building’s exterior, as illustrated by the archway facade of Fountains Abbey in the UK.

Staircases are used to magnify both a physical and a symbolic transition from a lower level to a higher one, or from higher level to a lower one. As the North door of the Concatedral de Castellón in Spain exemplifies, churches often feature staircases in front of their doors, meaning that during a religious procession people literally and figuratively rise into the sacred place.

Descending staircases highlight an opposite hierarchy of structure. For instance, at the Nimrod Fortress Doorway on Mount Hermon in Lebanon, soldiers placed at the top of the fortress have more visibility and technical advantages over their rivals. The staircases placed within the passageway illustrate this hierarchical order in architectural terms. The “lowered” effect is further enhanced by the repetition of arches and their difference in heights.

Another strategy is to design a doorway protruding from the facade. Protrusions can be a very simple and efficient design strategy – something well-exemplified by the door of this vernacular and uncluttered Newstyle Church in Scotland.

But protruding doorways can also be more elaborate. Designed for the 1900 Universal Exhibition in Paris, the Petit Palais features a protruding facade and staircase, with arrivals to the palais beginning with a rising procession towards the entrance. The staircase is flanked by sculptures on pedestals, and at its top, pairs of columns and arches receding in space frame the doorway.

Ornaments have regularly been used on Church facades. The tradition stems from the Middle Age when iconographic content was used to illustrate the symbolic values and specific devotion of a church to its often illiterate laymen. At the Saint George Covenant in Prague, the entrance door is framed and indented. The composite columns surrounding the wooden door support an arched pediment depicting St George slaying the dragon, along with an accompanying inscription on the entablature.

Notre Dame’s “Portail du Jugement Dernier” in Paris similarly conveys a religious message. For this indented doorway, the vaultings were adorned with numerous small-scale figures of angels, prophets, martyrs and virgins among others. The last judgment – a passage from the Gospel of Matthew – is depicted on the arched pediment, showing once again that framed and indented doorways can be intensified with the use of ornament.

The Shah Mosque in Isfahan also show the use of ornaments in religious settings, this time with calligraphic inscriptions and seven colors of mosaic tiles. The portal visually differentiates itself from the rest of the structure as it is higher and framed by two minarets. On the portal itself, verses of Mohammed and Ali are inscribed, further outlining the large pointed archway. In the recessed transition space before the entrance door, pointed arches and “Muqarnas” typical of Persian architecture’s vaulted ceilings bring a feeling of depth. 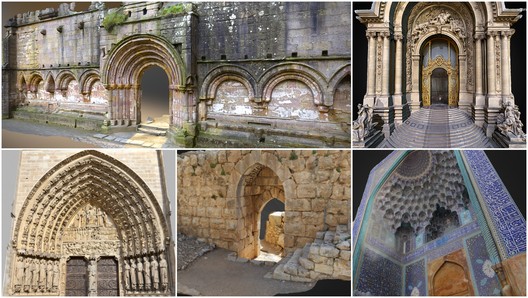