British preservation group Twentieth Century Society has publicly denounced plans by David Chipperfield Architects to convert the Eero Saarinen-designed, soon-to-be former US Embassy near London's Grosvenor Square into a "world-class" 137-room hotel. Central to Chipperfield’s plan is an enlargement of the sixth floor to make room for a double-height event space, a move Twenieth Century Society believes will “cause significant and substantial harm to the character of the building.”

Set to be vacated upon the completion of a new embassy building designed by Kieran Timberlake next year, the Grade-II listed design by Eero Saarinen was purchased in 2009 by developer Qatari Diar, who announced plans to transform the building into a luxury hotel containing five restaurants, six shops, a spa and a ballroom with space for 1,000 people and other event space.

This past April, the developer staged a competition for the building renovation, inviting top architects including Foster + Partners and KPF to submit proposal for transforming the historic structure. Ultimately, David Chipperfield Architects were selected for their design, which paid special attention to respecting the original architecture.

But for the Twentieth Century Society, the proposed changes still go too far. In a letter to the Westminster council, the nonprofit group outlines areas of the plan which they believe will cause irreversible harm to the Modernist embassy, including the removal of the original staircases, the demolition of the majority of the internal spaces, and the sixth-floor expansion.

“The proposed double-height sixth floor will damage the present proportions of the listed building: the rhythm of the front façade will be fundamentally changed,” stated the letter.

“We are disappointed that the applicant has persisted with this damaging scheme notwithstanding the society’s suggestions at pre-application stage as to how the effect may be ameliorated.” 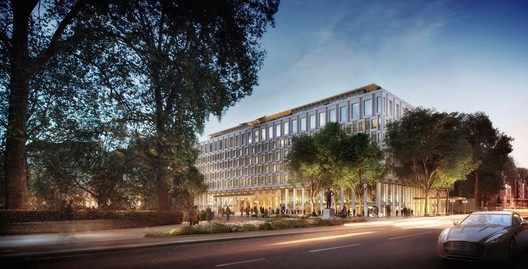