As the Syrian government prepares for the rebuilding of cities following the December 2015 ceasefire, Al-Sabouni hopes to prevent past conflicts from happening again through a renewed urban fabric. This brings up the famous Corbusian rhetoric, “Architecture or Revolution,” but interestingly it seems to be a Corbusian vision of the city that Al-Sabouni is against.

Before the conflict, the city of Homs was the third-largest city in Syria. Home to almost a million people, it was an important industrial center that reflected Syria’s religious diversity composed of Sunni Muslims, Alawites, and Christians. Historically, the city of Homs has always been a diverse place with a number of historic mosques and churches throughout the city. But in the mid 20th century, after France took control of Syria as a result of the Sykes-Picot agreement, Homs was the subject of a Le Corbusier-influenced modernization process.

Dubbed the Syrian revolution’s “fallen capital,” much of Homs remains in rubble today following the retreat of rebel troops in the area and the ceasefire of 2015. During the hostilities, the government launched a major offensive on the district of Baba Amr, which was predominantly occupied by Sunni Muslims, to suppress rebel groups. Al-Sabouni cites the slum-like conditions in predominantly Sunni Muslim areas to be the root of sectarian conflict in Homs.

As the conflict halts, the sitting government in Syria is planning a rebuilding of Homs, and in particular the Baba Amr neighborhood. Their urban plan proposal consists of tall tower blocks, and wide open freeways—the kind of Middle Eastern urbanism that is best exemplified by rich cities such as Dubai, and which Al-Sabouni opposes.

In her effort to create an architecture that “gives back” to the public she, along with Team Render, formulated an urban design inspired by trees which is capable of growing and spreading organically, echoing the traditional bridge hanging over the old alleys, and incorporating apartments, private courtyards, shops, workshops, places for parking and playing and leisure, trees and shaded areas. While Al-Sabouni’s proposal gained international recognition, the sitting government in Homs has rejected her plan for Baba Amr.

Al-Sabouni recognizes that there are many ways to rebuild the city. As for her plan, she states: ”It's far from perfect, obviously. I drew it during the few hours of electricity we get. And there are many possible ways to express belonging and community through architecture. But compare it with the freestanding, disconnected blocks proposed by the official project for rebuilding Baba Amr... We can learn from this. We can learn how to rebuild in another way, how to create an architecture that doesn't contribute only to the practical and economic aspects of people's lives, but also to their social, spiritual and psychological needs.” 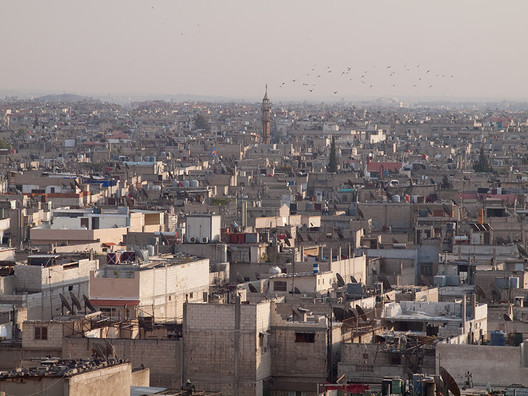