Save
“Beyond the City”: A Captivating Look at the Design of the Hinterland
Share
Or
Copy

Felipe Correa’s latest book “Beyond the City: Resource Extraction Urbanism in South America” takes us to a region that architects and urban designers typically have neglected—the hinterland. The South American hinterland provides a unique subject of analysis as it has typically been urbanized for its natural resources, which are tethered back to the coastal cities where these resources are either consumed or distributed to global markets. Within this context, the hinterland is viewed as a frontier whose wilderness is to be tamed, put to work, and territorialized through infrastructure and urban design. Beyond the City provides an insightful look into these processes and the unique urban experiments that emerged in South America. Organized by five case studies, Beyond the City is tied together by what Correa has termed “resource extraction urbanism,” which he links to “new and experimental urban identities in the context of government-sponsored resource extraction frontiers.” Written as a lucid historical account that anchors the discussion within the political, economic, and social context, as well as within global design discourse, the book is also projective—setting the table for a series of questions on how design can act in these landscapes.

The first case study focuses on Belo Horizonte, a coffee-producing and iron-mining settlement planned by engineer Aarao Reis in 1893. Seen as a predecessor to Brasília, Belo Horizonte was established as an instant capital with an administrative and commercial center that would anchor the hinterland. Inspired by Enlightenment values, Belo Horizonte consciously deployed a rational plan that acted as a “political and economic staging ground”—ordering movement and privileging hygiene through a city-beautiful homage to L’Enfant among others. Despite its idealized grid geometries that provided order to the landscape, the city remained isolated until rail infrastructure connected it to other settlements in the 1920s, positioning it as a central hub within the continental interior. The rail line also instigated new industries and allowed for the absorption of disaggregated hinterland populations into Belo Horizonte. In fact, the railway serves as a clear reminder that infrastructure is even more critical than idealized urban forms in inciting urban transformations. Extending power from the city to hinterland through planning concepts, the first case study in Beyond the City takes us to the hinterland yet keeps us within the familiarity of the city.

The next case study transports the reader further into uncharted territory—to the Northern Chilean desert, where a constellation of extraction towns developed around the natural nitrate industry in the late nineteenth and early twentieth century. Correa’s unique analysis dives both into the territorial logic of extraction that developed a series of logistical infrastructures (ports, railroads, etc.) and the semi-autonomous logic of the extraction towns, such as Maria Elena. The territorial logic of the constellation was primarily comprised of a series of oficinas salitreras (extraction camps) which were grouped into the geopolitical system of “cantons” and linked to other settlement types—the coastal port city (to distribute goods to global markets), railroad hub town (intermodal transfer), and Andean oasis (water and agriculture)—via rail infrastructure. Each settlement type from the mountain to the ocean had a role within the system, and although the components had a degree of autonomy, they also had interdependencies reminiscent of Geddes’ Valley section that served to domesticate the harsh Atacama Desert landscape. Now largely abandoned, Correa argues for a reinvestment in this region through art, entertainment, and tourism. While these programs (and others) could take advantage of the existing infrastructure within this remote area, it is unclear why these extractive landscapes should continue to be inhabited or how the design of these infrastructures could anticipate and acknowledge potential future industries.

This tension between resource extraction towns as mechanisms of control that import ideal town plans to the hinterland and the larger territorial extraction practices that organize the landscape based on where resources are located, how they are extracted, and where they are moved to, is best exemplified in the third case study on petro encampments. Ciudad Ojeda was the first formal city to be established by the Venezuelan government in response to the migration associated with the emerging oil industry. Conceived by architect Cipriano Dominguez, the city had an idealized plan of concentric rings wrapping a central square. As new oil deposits were discovered, it was oil derricks that organized the landscape and urbanization around Ojeda, reducing Dominguez’s plan to but a small attempt to import control into a landscape driven by extraction logics. A more extreme case of this is found in Nueva Loja in Ecuador, whose prospecting strips of extraction have now served as the inadvertent framework for a city of over thirty thousand residents. Correa’s powerful analysis—through drawings and text—of the relationship between extraction processes and future productions of urbanism ask the reader to consider outcomes that are not inadvertent but rather planned within the infrastructural deployment of these industries. This quickly becomes a design question to consider future scenarios that leverage these industries as the originating catalyst.

It becomes exceedingly clear through Correa’s analysis that resource extraction urbanism is not only the territorial deployment of infrastructures related to industrial processes that set up a territorial frame for urbanization, but also a symbolic ordering of the landscape into critical town nodes that civilize the hinterland while creating a canvas for urban and architectural experimentation. Such experimentation was at the center of Ciudad Guyana, which attempted to merge design with social sciences. Designed by the Joint Center for Urban Studies, a research entity between Harvard and MIT, the city uniquely sought to reconcile rapid growth with a longer-term plan for economic development. Designed as a linear city that linked a series of nodes, the town was conceived of as a proactive framework for hinterland evolution rather than the byproduct of the extraction industry.

The final case study takes us once again to a symbolic ordering of the landscape in the plan of Vila Piloto (1962) along Brazil’s Parana River basin. Part of a TVA-influenced hydroelectric network that merged energy, hydrology, and regional planning into a larger urbanization strategy, Vila Piloto’s distinct circular plan of concentric rings are not as rigid as they first appear. Anticipating a transforming population, the houses of the original settlement were relocated, and slowly this circular framework was infilled by new residents that leveraged the services and amenities inscribed in the city’s plan. In this case study, we already see a critical move towards anticipatory design, and an understanding of the lasting legacy of these towns being their infrastructural arrangement both at the scale of the territory and settlement.

Today, once again South America is undergoing a process of hinterland urbanization, making Beyond the City a critical and timely guide to navigate potential opportunities within new infrastructural developments. You could argue that the catalyst of the Beyond the City is the Initiative for the Integration of Regional Infrastructure in South America (IIRSA), an agreement by eleven South American nations to deploy ten east-west infrastructural corridors across South America, creating a comprehensive energy, movement, and communication network. Already underway with more than half of the 524 projects under construction, the IIRSA plan once again brings the hinterland to the foreground.

The clues that Beyond the City provides are numerous. The historic analysis operates in a transcalar manner—moving between a territorial logic, urban settlements, to construction methodologies and materials—making it exceedingly clear that a holistic design project needs to consider the feedback between the territory and detail, as both are engines to organize place. Further, the case studies shed light on the design of the foreground versus the background. By foreground, I refer to the idealized city plans that are typically in the domain of architects and urban designers. In several cases in Beyond the City these plans are used to provide a symbolic ordering to the landscape and instill a civilization project into and onto the hinterland. Simultaneous to this, Beyond the City also reveals the background—organizational strategies that typically sit outside the domain of designers—such as the deployment of infrastructures and settlements based on extraction principles. Correa’s book suggests the need for design to engage in both the foreground and background in order to holistically link the territory to the settlement but also to more proactively account for the future of these settlements once they’ve exhausted their resources. Finally, Beyond the City reminds us that urbanism is still a site of experimentation. While the neoliberal city has eroded such dialogues in urban design, the remoteness of the hinterland and its instigation typically by a singular entity reawakens an arena for experimentation on systemic integration and holistic design. As the hinterland across the globe continues to urbanize and grow, Beyond the City provides a fascinating new subject for designers along with a captivating historic account that yields a series of experimental questions and templates.

Neeraj Bhatia is founder of design practice The Open Workshop and co-director of The Urban Works Agency at CCA in San Francisco. 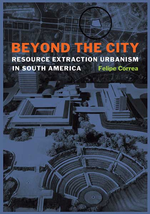 Beyond the City: Resource Extraction Urbanism in South America
Buy from University of Texas Press Buy from Amazon
Share
Or
Copy
About this author