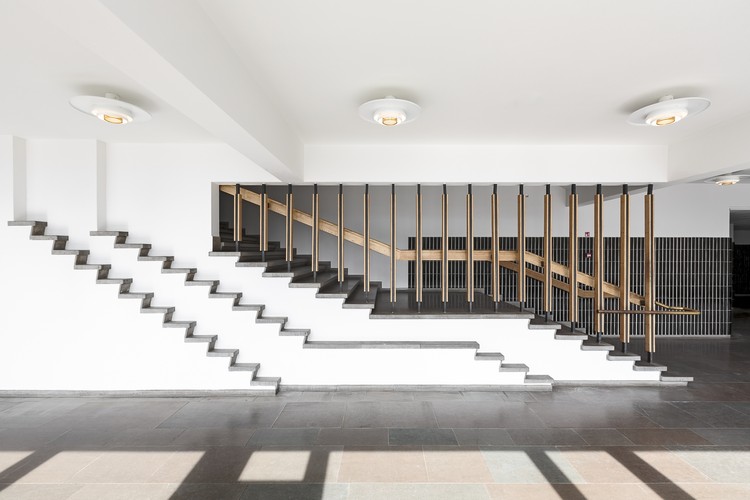 Text description provided by the architects. The former main building of the Helsinki University of  Technology took on a new role when three universities   were merged as Aalto University in 2010. The Otaniemi  Campus designed by Alvar Aalto was chosen as the shared home of the Aalto Schools of Engineering, Business and   Arts & Design.

The main building was originally completed in two stages in 1964 and 1974. The entire building was in need of renovation to bring it up to a modern-day university’s needs, including improved accessibility and ﬂexible educational spaces. Some facilities were repurposed as they no longer served their original function. The HVAC systems, safety exits and ﬁxtures were  also in need of modernization.

Renovating such a prestigious landmark – exemplifying as it does a ‘total work of art’ – was a challenge. With the advent of ﬂexible working and learning practices, old buildings – even masterpieces – must adapt to changing user needs to maintain their value. Retroﬁtting ﬂexible educational spaces in an old building without altering the original architectural concept is difficult, however. The building required new HVAC systems and safety exits for which no space was allocated in the original plan. Architects NRT showed exemplary skill in overcoming these challenges in their tailored planning and execution.

Each wing – variably 2-4 storeys high – is designed to function as a separate building linked to the campus complex. The main volume is rhythmically articulated by small courtyards. Aalto envisioned a leafy, American-style enclosed campus with  paths traversing the yards between the main building, library  and shop. The striking, auditorium-like roof of the low-rise  main building is an iconic campus landmark

The main façades, spatial logic and detailing were fully  preserved, with the entrance hall, auditorium and main cor- ridors superbly restored to their former glory. The workroom wings underwent heavier modiﬁcations, with spaces opened  up for greater ﬂexibility. Most of the new ventilation engine rooms are now located in the basement, maintaining the hori-zontal proﬁle of the teaching wings. The architects preserved the most valuable features of the architecture in a logical  hierarchy. The laboratories, studios and lecture rooms were  converted into open spaces that can be furnished adaptably  to serve group learning activities. The open-plan work hubs  are spatially ingenious, though the furniture could be more inspiring and better balanced with the architecture.

Today the architect is no longer a ‘creative genius’ so much  as a ‘master negotiator’ who strikes a balance between  the project’s architectural aspirations, the wishes of various  user groups and other practical requirements. In this project,  Architects NRT successfully reconciled goals that were to  some extent contradictory. The building was still in use by  the university when the renovations began, and its user base  expanded after the school became part of Aalto University.  NRT did excellent work in catering to the needs of all of   the school’s faculties in this ambitious renovation project. HR 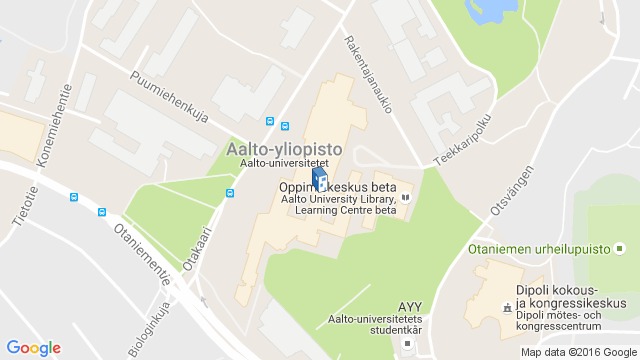