The National Trust for Historic Preservation and People for the Pavilion have announced the winners of the New York State Pavilion Ideas Competition in the Queens borough of New York.

The New York State Pavilion is more than half a century old, but Philip Johnson’s iconic structure in the center of Queens is still the ‘Tent of Tomorrow’ to those who know it,” notes architecture critic and competition judge, Paul Goldberger. The outpouring of ideas for its reuse not only shows how beloved this structure is, it gives me confidence that this great building can have a future that will be as meaningful as its past.

The winners of the New York State Pavilion Ideas Competition are:

A repurposed Pavilion would serve as the base to a suspended natural environment with its design nodding towards the future. “Hanging Meadows” would feature plants from the Northeastern U.S. and provide visitors with a beautiful view of the city while standing amidst nature. A planetarium and classroom space would be found below the garden.

Focusing on the community’s priorities and input, this multi-purpose space would work in conjunction with public programming. Shuttles from local community and senior centers would be sure to include everyone on the various local events and festivals that would be hosted in the open event space.

This plan would transform the Pavilion into a cultural marketplace working towards harmony through human interaction and sustainability. Features such as a communal children’s play area and solar panels pave the way towards a brighter future for the coming generations.

Submitted by Queens residents, the “Pavilion Park” would seek to honor the historical significance of the space and convert the vacant Pavilion into a public park. With a focus on the integrity of the original structure, the flexible communal space would be centered around a stage with built-in stadium seating.

The National Trust and People for the Pavilion will host a companion exhibition at the Queens Museum from August 5-28, where visitors can view the top entries submitted from around the world and learn more about the history of the iconic Pavilion.

News and project descriptions via The National Trust for Historic Preservation and People for the Pavilion. 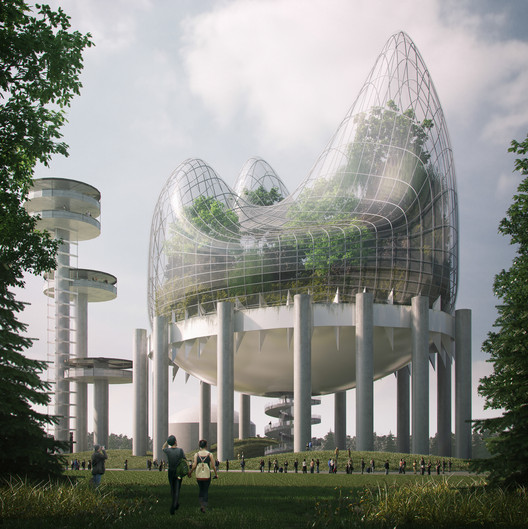