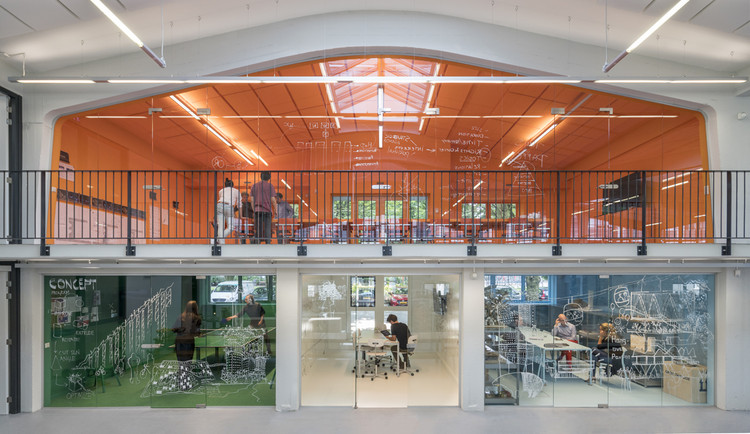 Text description provided by the architects. MVRDV’s 2400 m2 interior renovation for their new offices, with 150 work spaces, had at its core the idea to capture and enhance their DNA in what is now called the MVRDV House. The new space builds on the progress made in previous offices, learns from how the team inhabited and worked in the previous building and translated these into new, more accommodating and productive spaces.

“The expanding MVRDV family needed a new house; so this is exactly what we tried to capture. Everything that the home requires, a living room, a dining room, a sofa for the whole house to sit together,” explains MVRDV co-founder Jacob van Rijs. “This was also a chance to capture how we work and function as an office, then tailor-make new spaces that would boost our working methods and output; efficient spaces that enhance the collaborative ways in which we work.”

The large Family Room becomes the centrepiece for social interaction with three oversized elements of the home, the couch, dinner table and vegetation chandelier – a large tribune with a drop-down projection screen for lectures, office presentations or football; the long lunch table, at which the whole office gathers together daily; and a huge, split, flowerpot, which has in the middle MVRDV’s ’welcome team’. Past this, The  Atelier for the project teams takes up the main bulk of the central space and is light and quiet. A glazed wall, covered in doodles and working diagrams, separates the atelier from the living room stretching right across the centre three - out of five – main arches. Opposite this, like a section through a dolls-house, are the bold, multi-coloured meeting rooms. Each has its own theme and specific  furniture for different ways of meeting; The Drawing Room with whiteboard magnet walls for workshops, The Presentation Room in dark blue for larger formal meetings, The Lounge with low chairs for conversations in private, the brown and intimate Library Room and The Game Room for playing or informal meetings at the table-tennis table. And of course, several other special monochrome rooms.

The five arched segments of the offices are enhanced, the previously enclosed areas were knocked open and replaced with glazed walls. From almost every point in the office you can see other people within the space. The workspaces themselves hope to breed a collective atmosphere. Custom made tables were designed for entire teams as one large unit with no table legs or dividers in the way.

The creative work attitude is furthermore reflected in some specific characteristics: Unlike the rest of the office who enjoy light-filled rooms and views across the office, the directors choose to have their space tucked away in a darker corner, on the ground floor close to the printer and coffee corner, to encourage them to be out amongst the rest of the MVRDV team. Gender free toilets, a wall with family pictures and a communal, 30 meter long lunch table are signs of the social fabric of the company.

The building housing MVRDV’s new offices, Het Industriegebouw, is in itself a large community of creative, technical and entrepreneurial industries; everything ranging from small tech start-ups to larger design firms. Pop-up cafés and restaurants create an occasion for users of the building to congregate; something which will be further enhanced once MVRDV designs the communal courtyard for the building.

“For us, it also makes a lot of sense to be part of Het Industriegebouw as a building and a community,” tells Jacob van Rijs. “Now we share a work space that could allow for future, flexible growth and collaboration within the building, just as was the design intent of the original architect.”

The building was originally designed by Dutch post-war architect Hugh Maaskant in 1952 who also designed iconic buildings in the city such as the Groot Handelsgebouw, whose roof was the destination of MVRDV’s project ‘The Stairs’ between mid-May to the end of June, and the Hilton Hotel in Rotterdam’s centre. 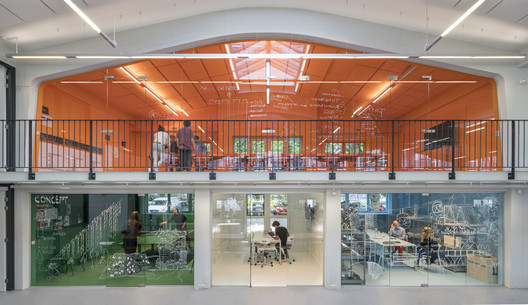