Concealed behind an 18th century Baroque façade in Strasbourg’s Place Kléber, the Café L’Aubette is a dazzlingly incongruous expression of the 1920s De Stijl movement. Designed by Theo van Doesburg, one of the movement’s founders and leading lights, the Aubette’s minimalist, geometric aesthetic was heavily influenced by the work of contemporary artists such as Piet Mondrian. In designing the café’s interiors, Van Doesburg sought to do more than simply place viewers before a painting; he wanted to envelop them in it. 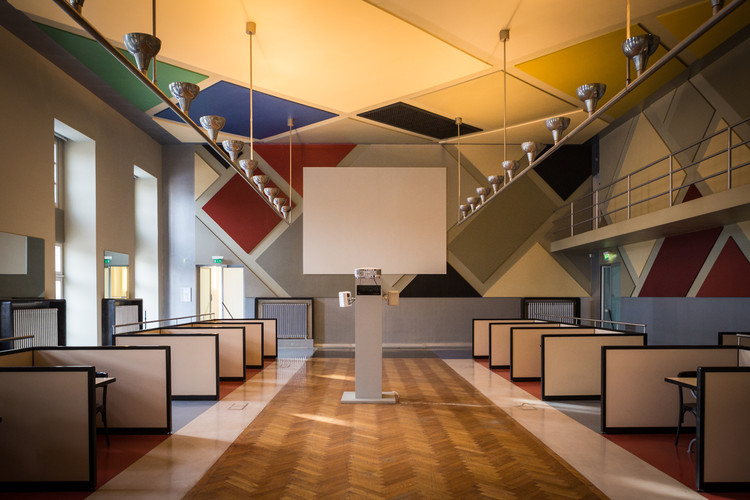 The De Stijl movement began in the Netherlands in 1917 by an association of painters, sculptors, decorative artists, and architects. Rejecting the ornamental and spatial dogma of the Beaux-Arts school that had dominated Western design in the 19th century, members of the movement instead advocated for the relative purity of abstraction. Cubism provided a significant inspiration for the movement, which came to be characterized by bold, orthogonal minimalism. The paintings of Mondrian, composed purely of rectangles and straight lines at right angles, gradually abandoned symbolic representations of reality in favor of their own abstract visual rhythm. This rectilinear style lent itself toward translation into three-dimensional form – a task that would be undertaken by one of Mondrian’s contemporaries, a painter and architect named Theo van Doesburg.[1]

Born in Utrecht, Netherlands in 1883, Van Doesburg (originally named Christian Emil Marie Küpper) was a self-educated artist and architect.[2] It was Van Doesburg who would, in 1917, begin publishing the journal entitled De Stijl, featuring contributions from many of the artists and designers who had influenced him during his career.[3] He is additionally known for his 1923 manifesto entitled “Tot een constructieve dichtkunst” (“Toward a constructive poetry”) in the Dadaist journal Mécano, in which he expressed beliefs in line with what would become Surrealism.[4] His own design work was focused on the use of color as a means of activating space. This, he believed, helped viewers to better appreciate abstract form. Van Doesburg often worked in collaboration with other artists, rejecting the egocentrism of individual artistry. It therefore followed that when he was tasked with designing several new interiors for the Café l’Aubette in central Strasbourg, he did so in tandem with artist Jean Arp and his wife, Sophie Täuber.[5]

The Aubette was built in 1767 by the architect François Blondel. Commissioned by the French government to construct a building that would reflect the latest style of the time, Blondel created a Baroque structure with a straight façade along the entire northern edge of the Place Kléber. The building’s original use as a military facility gave it the name Aubette, as orders were issued at aube, or dawn. A café was opened in the building in 1845, and in 1867, the Aubette became home to Strasbourg’s School of Music. In 1911, the city government called together 46 architects to redesign both the Aubette and the entirety of the Place Kléber; however, the outbreak of the First World War forestalled the project, which was abandoned by the 1920s.[6]

Van Doesburg’s involvement with the Aubette began in September of 1926. Convinced by his clients to set up an office on the Place Kléber itself, he began drawing up plans that would correspond with the new functions of the space. Included in the required program were a café, tea room, two bars, telephone booths, billiard rooms, two banquet halls with an adjoining foyer, kitchens, various offices, and staff quarters.[7] Although Van Doesburg, Arp, and Täuber ostensibly worked as a team, their actual design process was surprisingly disjointed; rooms were designed by different artists with little in the way of organized collaboration, allowing their personal styles to shape the individual spaces of the building.[8]

While the Arps’ work reflected their former involvement in the Dada movement, Van Doesburg instead saw the opportunity to implement his own theories of Elementarism.[9] Much like Mondrian, he designed in a purely rectilinear, orthogonal manner; the walls were covered in large grids of brightly colored rectangles. However, Van Doesburg did not rigorously bind himself to the principles of De Stijl when it did not suit him; he would break them in the interest of creating more expressive, dynamic spaces.[10]

This approach is perhaps best reflected in what he called the “Ciné-Dancing” hall – a space designed to function as both a film theater and a ballroom or cabaret. Here, the characteristic De Stijl rectangles are tilted at a 45-degree angle to the ground, creating a visual tension with the orientation of the doors, windows, and seating cubicles they envelop.[11] Van Doesburg also employed relief to add emphasis and interest to the walls and ceilings; where color would not satisfactorily activate a surface, the slight extrusion of the rectangular panel would compensate.[12] Van Doesburg may have played a large part in codifying the tenets of De Stijl, but in all aspects of his design—from choosing finish materials to creating a new typeface for signage—he worked as much in response to the particular environment of the Aubette as he did within the very guidelines he had helped to create.[13]

The radical interiors of the Café l’Aubette, while now lauded as a masterpiece of De Stijl architecture, were not met with great acclaim by the café’s patrons.[14] After less than a decade, the interior style was altered once again; it was not until the 1960s that restoration of Van Doesburg’s design was even considered. The ciné-dancing hall was restored between 1985 and 1994 based on period photographs and architectural drawings; the rest of the interior followed later, with the emphasis being on conservation of the original materials wherever possible. Meticulous care was taken to reproduce exactly the colors chosen by Van Doesburg and the Arps, and by 2006, the Aubette was restored to its 1920s appearance.[15] Now designated a historic landmark, the Café l’Aubette remains a monument to the marriage of graphic design and architecture facilitated by De Stijl’s principles of bold geometry. 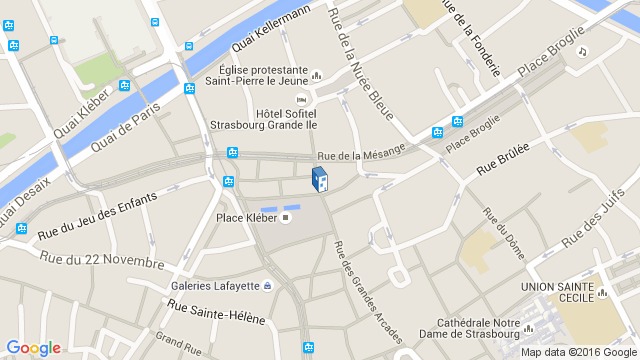 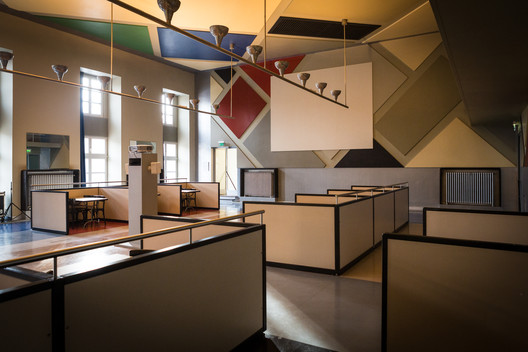