Save
Hospital Complex Broussais / a+ samueldelmas 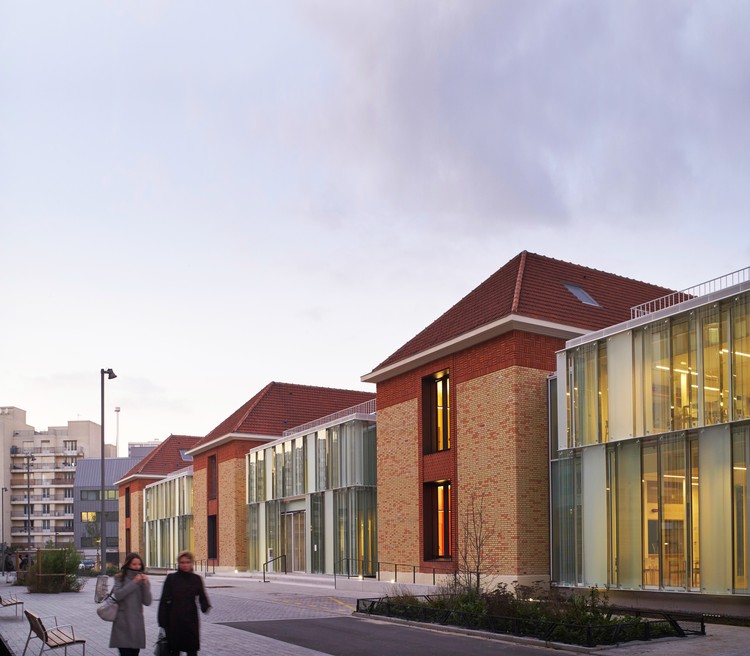 Text description provided by the architects. The project is very compact. It grows “in and with” the existing building. It’s objective is to emphasize the presence of the establishment as remarkable equipment in this new neighborhood that opens to the city and gives a large garden on the back of the building which makes the entire site breathe.

The intervention on the existing buildings is simple and limited, restrained and assertive. Three white abstract pavilions offer a clear interpretation of the intervention. They are placed between the wings and host living spaces. They open towards the city with a double skin façade made of clear and frosted glass. From the generous hall which we can pass through, the common spaces are accompanied by multiple patios and give a view towards the garden behind. The administration and the reception available in the day are located on the ground floor and accessible directly by a large open staircase. The rooms are organized around the big patios. It allows the ambulation and access to each level and to secured outdoor areas.

The different parts of the existing building were the purpose of a heavy restructuration divided in those following steps :

1- Demolition of all the outgrowths except the 3 north wings, which it makes room for a large garden;

2- Reinforcement of the foundations by injecting concrete grout to strengthen the buildings base;

3- Demolition of the existing vertical circulations and creation of hoppers to integrate new circulations more judiciously regarding to the new organization;

4- Surgical interventions of demolitions-reinforcements of existing work to open or widen a passage, in order to adapt the existing to the new distribution of functions. This is done frankly and clearly.

In the interior spaces, our wish to create a dialog between existing buildings and new interventions translated into fragments of stone or brick walls remaining visible and put into light. Therefore, for each crossing of existing walls, the matter is “cut” and painted in white, the existing walls of the facades in the north part of the circulation have been conserved and staged revealing the brick textures and formed concrete complements. The architectural view to add volumes sliding in the existing building’s weft or append against it allowed to keep the original readability of the building and to create a strong identity for the the Hospital Establishment for Dependent Senior Citizens (EHPAD).

The realization of the three glass pavilions started by the establishment of a metallic frame, post/beam supports collaborating floor to obtain a light structure and refined in opposition with the massive brick existing building. Each pavilion conceived on two levels is realized from a “forest” of posts as thin as possible (flat steel of 20x30cm) irregularly spaced and some more important of 2.80m spread from one part to the other to balance the whole. The glass facades hang on floor ends. The south oriented facades

are conceived with a double glass “skin” allowing a natural thermal regulation of the interior common spaces, floor living rooms and dining rooms widely lightened on the city side as well as the interior patios side. Their size perfectly match in altimetaire of existing moldings and volumes.

The two volumes built on the north façades including 36 rooms on two levels in total are realized in a reinforced concrete structure following the slabs and curtain walls principle.

We have sought to establish a relation between the ancient brick heritage and a monolithic architecture composed of raw concrete blocks in the rust coloured mass. 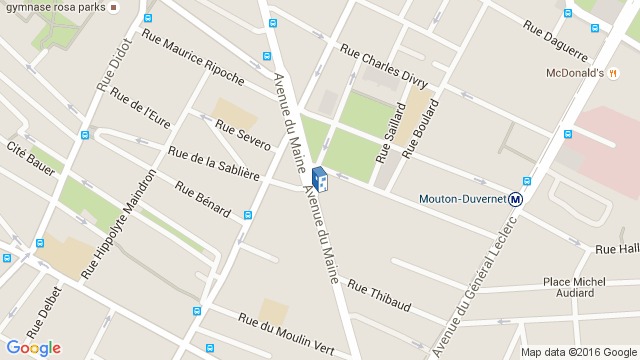 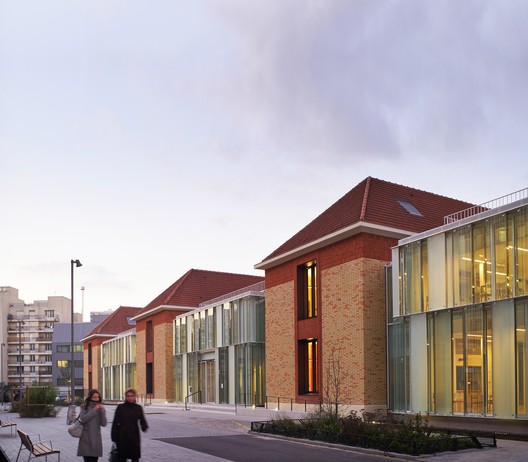