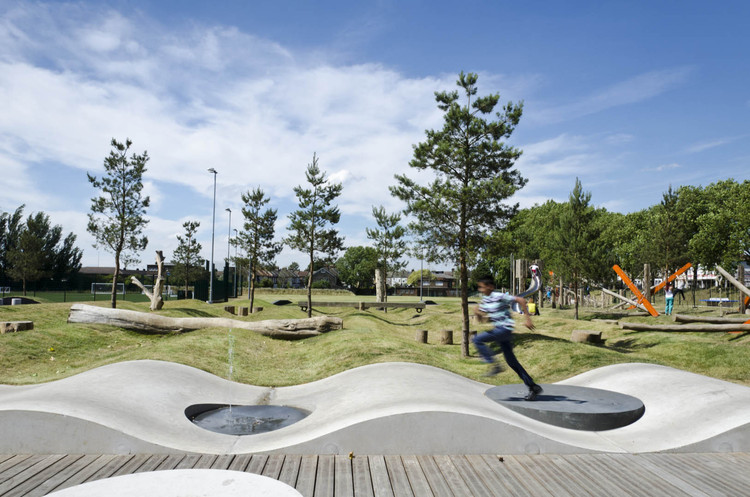 Drapers Field has a strategic role in the Olympic Legacy. This new park in east London is the first project integrating new Olympic developments within the Olympic Park to existing communities. KLA were commissioned to revitalise three parks in Leyton in the east London borough of Waltham Forest, through Olympic Section 106 funds. Working strategically in the Lea Valley on these projects, KLA were responding to the London Legacy Development Corporation’s direction to ‘Stitch the Fringe’ around the Olympic boundary.

Leyton is a key regeneration area bridging the existing east London communities, the new East Village (formerly the Athletes’ Village) and the Olympic Park. Drapers Field, which was used during the 2012 Olympics as a service facility, sits at this intersection of new and old. The new park at Drapers Field is linked - via the KLA designed Temple Mill Lane - to several Olympic Village projects: the Chobham Academy and Community Playing Fields and four residential plots. KLA made strategic proposals for all these sites and the practice has used design to help bridge the gap between different projects on either side of the Olympic boundary. Historically, Drapers Field was primarily used for football but was greatly under-utilised by the local community. The initial client brief called for the re-provision of the sports facilities, the refurbishment of the pavilion and the development of a play area. Building on the client’s initial brief, a shared goal emerged that both existing and new communities should bene t from the idea of a wider Olympic Legacy - a legacy that encouraged children and young people into sport, through play and informal activity. This informed the design focus.

In addition to improved sport facilities, the innovative landscape encourages informal play and other active uses such as a cycling route which can also be used for cycle training. The refurbishment of the pavilion - to become a key community hub and cafe - also has a new strong, physical relationship to the park. The new bold, large-scale corrugated landscape makes the whole landscape playable.

The enticing corrugated forms, made of grass and concrete, enhance the play opportunities and challenges of the play equipment. Cutting through the corrugated grass plane, the playful route also encourages spontaneous activity on the trampolines and other play elements located along it. Water-play, embedded within the corrugated forms, incorporates water pumps and children can control the water’s ow through channels, creating splash pools. The playful route to school includes a bike track with space for obstacles and for basic bike skills courses. This relates to the London Cycling Campaign’s drive for safe cycling routes to schools and to GLA objectives. By increasing footfall into the Olympic Village, Drapers Field is now one of the main opportunities for the new and old community to meet and integrate. KLA have now completed the Chobham Academy project within the Olympic Village and have also designed Temple Mill Lane with a playful urban realm to promote play on the route to school. 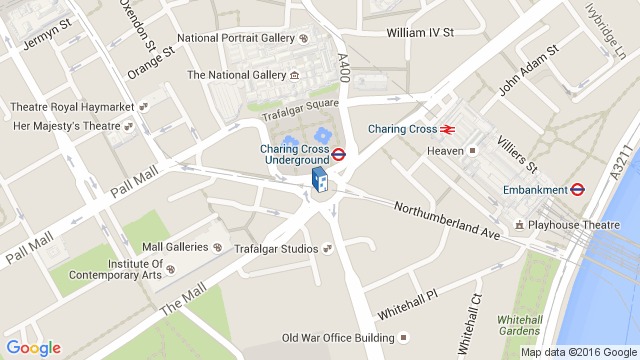 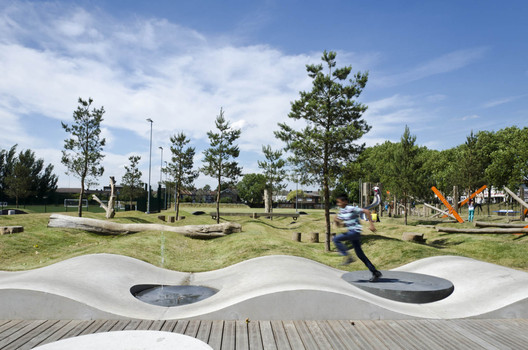