Save
Inside Las Pozas, Edward James' Surrealist Garden in the Mexican Jungle
Share
Or
Copy

Edward James, one of the most eccentric and interesting twentieth-century collectors of surrealist art, arrived in Xilitla, Mexico at the end of the 1940's. The British writer was captivated by the splendor of the landscape of "Las Pozas" (The Wells), where he created a fantastic home, which includes a unique sculptural space unlike any other in the world.

Surrealism, whose sources of creation are found in dreams and the subconscious, in theory, could never be used to build things in real life. Edward James - described by Salvador Dalí as "crazier than all the Surrealists together" - designed a sculpture garden that defies any architectural label and allows a glimpse of something new, moving between fantasy and reality.

Columns with capitals that look like giant flowers, gothic arches, dramatic gates, pavilions with undetermined levels and spiral staircases that end abruptly in mid-air, as if they were an invitation to the horizon. In short, Edward James made concrete flourish along the lush flora and fauna of Xilitla, making surrealist architecture possible. 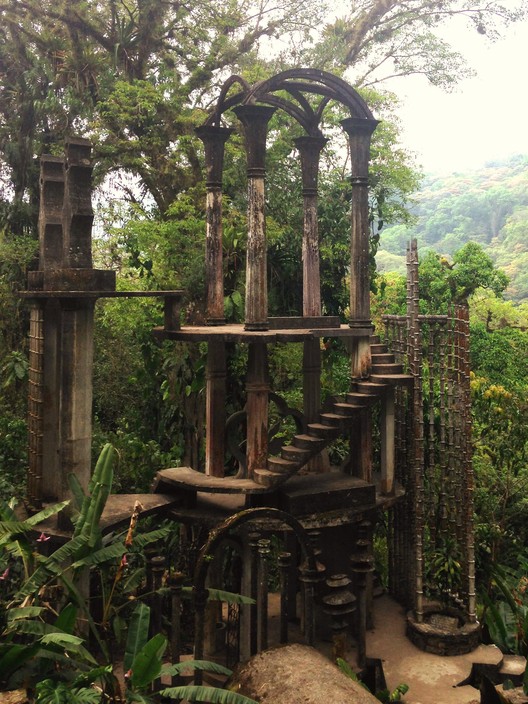 "Las Pozas" (The Wells) is a collection of concrete architectural structures and fantastic routes that make up a sculpture garden. A river with waterfalls runs through the garden and it is surrounded by jungle in a vast terrain. Its design was conceived by Edward James and Plutarco Gastélum in Xilitla, Mexico.

As the story goes, when they were exploring the Huasteca Potosina, a cloud of butterflies surrounded James and Gastélum while they were bathing in the river. The British writer interpreted this event as a magical sign. So, between 1947 and 1949, he began the construction of his version of the "Garden of Eden".

During the first few decades, James focused his attention on horticulture. However, in 1962 a blizzard destroyed his collection of orchids. He then decided to build a perpetual garden and began to build concrete structures that resembled floral elements.

Since then, the sculpture garden has been converted into a source of creation and work for the locals. The entire construction of Las Pozas took about 150 people, including carpenters, bricklayers, and gardeners.

In 1984 Edward James died during a trip to northern Italy and in 1991 the doors of "Las Pozas" were opened to tourists.

"Las Pozas" and Its Lessons for Architects

Over the years, the sculptures gradually merged into a kind of random city, with harmony created by its structures and dialogue with its natural surroundings. Along its paths are hands and heads made of concrete, stone snakes, a bathtub in the shape of an eye - where James used to bathe in the pupil, surrounded by carp in "the white of the eye" - all with a tone of ruins, of something unfinished, taken by the jungle adding some mystery.

Walking through the Sculpture Garden is like exploring an undiscovered city. It's almost as if its labyrinth paths fuel the desire to discover different corners and details. Upon entering, the architectural sculptures appear at different levels and views; it's the place where you go to see and be seen.

In "Las Pozas" the viewer creates a new type of contact with the constructed work, the landscape, and all the other visitors. In a fantastic space like this, everyone seems to feel the same ambiance and all their thoughts stay within this environment. They are no longer bystanders concerned about day-to-day problems, everyone starts to live in the moment and reflect on each step taken.

In the first manifesto of the surrealist movement, André Breton defined it as: "... a dictated thought with the absence of any control exercised by reason, exempt of any aesthetic or moral concern." This idea is present in the architecture and in all creation behind "Las Pozas," its buildings are built contrary to what we have learned in architecture school -- they don’t offer a learning experience, but rather propose a discovery experience.

Clearly, these fantastic works could not be replicated in our ordinary cities, but they certainly present a new way of looking at the reality of architecture we produce every day. It is through new perspectives that we can imagine new ways of living.