Zaha Hadid Architects’ (ZHA) 170-meter-tall Generali Tower has topped out at 44 stories in Milan, Italy. The Generali Tower, along with two other towers, forms the centerpiece for the CityLife masterplan to revitalize the old site of Milan’s International Fair, which closed in 2005.

Through the redevelopment, which began in 2004, the site will be open “to year-round public use, with the inclusion of new civic spaces, public parks, and residential buildings, in addition to shopping areas and corporate offices, all with direct transport connections via the Tre Torri station on the line 5 of the city’s metro system.”

The Generali Tower is aligned at ground level with its surrounding public park, a connection that is reinforced by the curvilinear geometries of its podium, which are “defined by the tensional forces generated from” important intersecting city routes.

The torsional force of the Tower “is transferred vertically through the tower by the realignment of successive floor slabs that incrementally ‘twist’ about a vertical axis. This incremental twisting is defined by algorithms to give each floor a fractionally different relationship to the floors above and below. As the tower rises creating broader views and connections across the city, this twisting orientates the tower's upper floors to face the centre of Milan and the Duomo.”

The Tower is targeted to receive a LEED Platinum certification through elements like its double-façade system, as well as inclined structural columns, which increase efficiencies in usable floor areas. It also has a system of sun-deflecting louvers and ventilating registers that draw air outside. 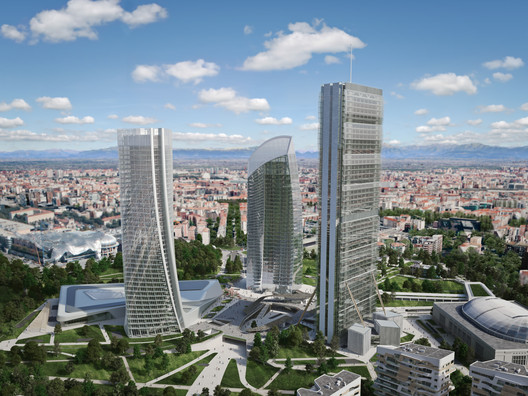