A team of engineers at Autodesk have been pushing the limitations of conventional 3D printing -- not by redesigning the machines themselves, but by creating a network to harness their collective power. Autodesk's "Project Escher" is a new printing system that utilizes the power of several 3D printers at once to fabricate complex parts in unison, reports FastCoDesign. The new system can increase production speed by up to 90%.

While the benefits of 3D printing are undeniable, its lengthy process has impeded it from being rolled out in large-scale additive manufacturing. Designers in industries such as automotive, aerospace and construction want to utilize the power of 3D printing to form complex geometries, but as the printing is measured in weight per hour, large objects can take impossibly long amounts of time.

Project Escher uses a gantry system with suspended 3D printing "bots," selectively assigning a part of the model to each, producing a fully assembled final object. Autodesk's hardware lead for the project, Corey Bloome, told FastCoDesign that there are no limits to the amount of printing bots you can have in the gantry, and the speed will increase with each bot added.

As the design currently stands, this system uses only 3D printers, but Bloome said that in theory robotic arms could be added to the gantry, allowing other elements to be embedded in the final assembly. This means that complex objects, such as cars, have the possibility of being "printed" in one sitting.

Autodesk is still developing Project Escher in house, with the vision to start enlisting companies to experiment with their own processes in the near future. For more information, check out Autodesk's video above, or the Project Escher website. 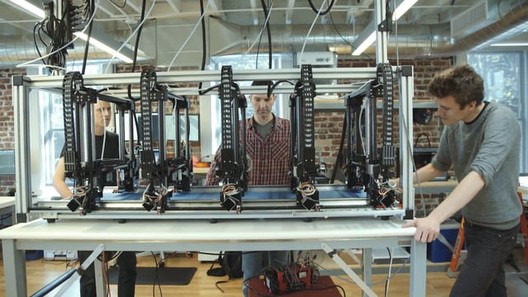