Following “Brutal London,” Zupagrafika has released another collection of illustrated paper cut-out models, “Paris Brut," which portrays the Brutalist architecture of Paris from the late-’50s through the 1970s. The set features buildings from the city’s arrondissements and banlieues, the latter of which became a central locality for Habitation à Loyer Modéré, a type of public-private, rent-controlled housing in France. 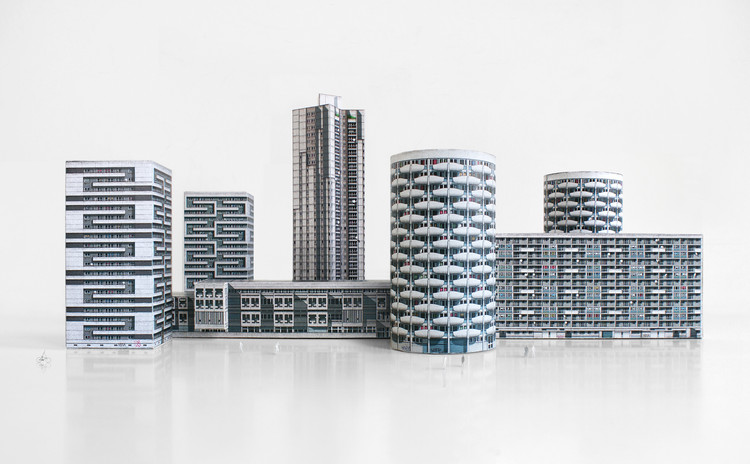 According to the designers, “The concrete blocks of Cité des 4000, round towers of Les Choux de Créteil, Cité Curial-Michelet - largest estate of Paris, and high-rise Orgues de Flandre towers, were to provide thousands of new homes for the rapidly growing population. Soon however, some of these urbanizations became affected with social problems and gained off-limits status.” During the 1990s and 2000s many of these housing blocks were renovated or demolished. The rubble that was once Cité des 4000 became a metaphor of the false promises of modernism to create housing for the middle and working class.

But all has not been tragic for Paris’ stock of Brutalist buildings, certain structures have revitalized with new purposes, such as Jacques Kalisz´s administrative building in Pantin, which since 2003 has been home to Le Centre National de la Danse.

With its projects, Zupagrafika is interested in “cataloguing postwar modernist architecture in a playful paper form that allows us to look at this type of constructions from another perspective.”

“Paris Brut” and others collections by Zupagrafika are available in their online shop, here.