Bjarke Ingels is the recipient of the 2016 Louis Kahn Memorial Award, an annual prize established in 1983 to recognize "excellence in architecture" in honor of one of Philadelphia’s most influential architects. Ingels was honored at a ceremony on May 9th, hosted by the Center for Architecture and Design, where he delivered the annual talk that accompanies the award.

Speaking on the subject of Louis Kahn, who died the same year Ingels was born, in 1974, he remarked, “I wouldn't say that my work is linear of Louis' but I think that he rediscovered symbolism and designed super-functional architecture that's been lost and has been re-created by pragmatism." This fits into Ingels' own views on his practice, Bjarke Ingels Group (BIG), which he described as “pragmatic utopianism,” asserting a belief that architecture is “the art and science of turning fiction into fact.”

Remarking on BIG’s first project in Philadelphia, 1200 Intrepid, Ingels stated, “When we were coming up with the design, there was a clear place taking form already—the Navy Yard master plan was already in place. We thought we should inherit as much from the park, designed by Field Operations, as much as possible. We thought the circular park would be sort of a strong gesture and influence the building, so we designed the road in front of the building to curve with it. The white prefabricated concrete panels are sort of like the bracelets of a watch, and they tilt so that it creates a graceful, organic space and inviting cave like canopy."

The Louis Kahn Memorial Award + Talk raises funds to help support the Charter High School for Architecture + Design (CHAD), founded in 1999 by the Philadelphia Chapter of the American Institute of Architects. The school encourages children from underrepresented and underserved communities to pursue careers in the fields of architecture and design. 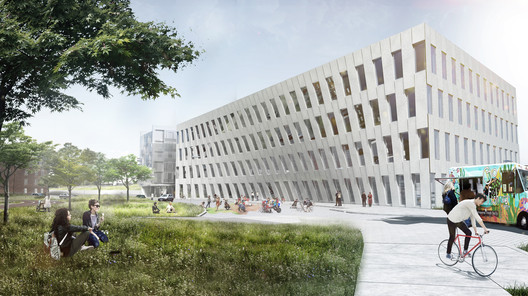