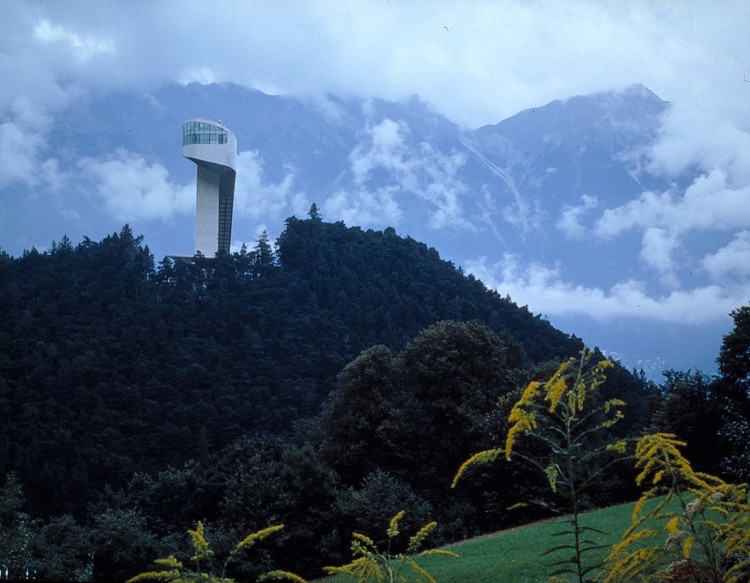 The Ski Jump has been a fixture atop Bergisel Mountain since its first construction in 1926. It has been the home to two Winter Olympics competitions – first in 1964, and then again in 1976. Even outside its service as an Olympic venue, the facility saw constant use; scheduling was so densely booked, in fact, that the local city authorities could only authorize one year between the demolition of the old structure and the opening of the new.[1]

In 1999, Innsbruck began a project to refurbish its aging Olympic Arena. Unfortunately, as the original ski jump facility no longer conformed to contemporary international standards, it was deemed necessary to build a replacement. The new Bergisel Ski Jump was to provide a greater variety of functions than its predecessor: alongside the specialized sports program, the facility was to include new public spaces, comprising a viewing terrace and a café.[2] Beyond these programmatic requirements, the Austrian Ski Federation evidently sought to create more than a piece of athletic infrastructure. They were calling for a new monument.[3]

With these specifications in mind, the Austrian Ski Federation hosted an international design competition for the new ski jump in 1999, and Zaha Hadid Architects were awarded the first prize in the competition in December of the same year.[4] Hadid’s proposal was massive, measuring 90 meters long and towering almost 50 meters over the peak of Bergisel Mountain. Despite its size, however, the Ski Jump was designed to blend seamlessly with the mountain: the various program requirements were molded into a single, minimal mass, with the ski ramp continuing the slope of the mountainside up toward the sky.[5]

Hadid described her design as an “organic hybrid” between a tower and a bridge.[6] The tower is a tall concrete shaft, forming a seven-meter square in plan.[7] Two elevators ferry visitors from the base of the tower to the café, which is situated 40 meters over the peak of the mountain. The café is part of the larger spatial volume perched atop the tower, which fuses the public spaces and the ski ramp into a visually cohesive whole.[8] The observation deck provides an uninterrupted view in every direction, allowing visitors to survey both downtown Innsbruck and the surrounding Alps, from a single space.[9]

The articulation of the Ski Jump’s different components as a single seamless, uninterrupted mass was not dictated by the program; nor was it purely intended as a visual confirmation of the hybridization of a tower and a bridge. A ski jump is the site of extraordinary speed and even flight. It is this spirit of motion that informs the flowing form of Hadid’s design, which embodies the dynamic nature of the sport it was built to facilitate.[10]

Unfortunately, while Hadid’s minimalist design captured the spirit of motion, it was not universally accepted. Some locals rejected the notion of having an unabashedly modern building looming over their town; Innsbruck was, for the most part, an emphatically traditional alpine city.[11]

The unease surrounding Hadid’s proposal was perhaps to be expected in Innsbruck, whose streets are lined with buildings dating back to the city’s rich medieval origins. The capital of the Austrian duchy of Tyrol since 1420, Innsbruck is peppered with monuments to its history. Most of the city’s most prominent landmarks, such as the Fürstenburg building, have existed for centuries – to introduce introduce a tower of concrete and glass overlooking the medieval spires of historic Innsbruck was seen by some as incongruous.[12]

Despite opposition, construction proceeded on schedule and the new Bergisel Ski Jump opened to the public in 2002. Like its predecessor, the new facility became the locus for constant activity: it is the third site of the Four Hills Tournament every January, while the summers see many world-renowned ski jumpers come to Bergisel to train – some for the Olympics. Other visitors can simply enjoy the view from the observation deck, whether they choose to watch the athletes skiing below or simply survey the surrounding alpine mountainsides.[13] 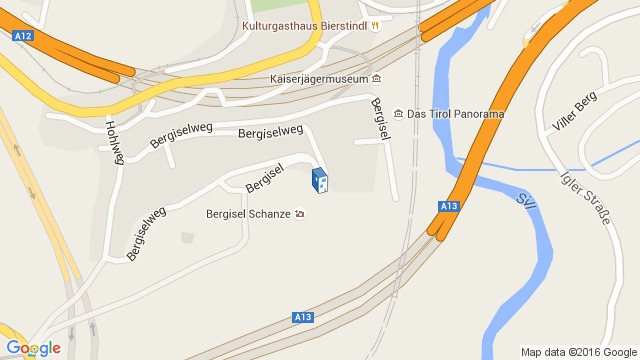 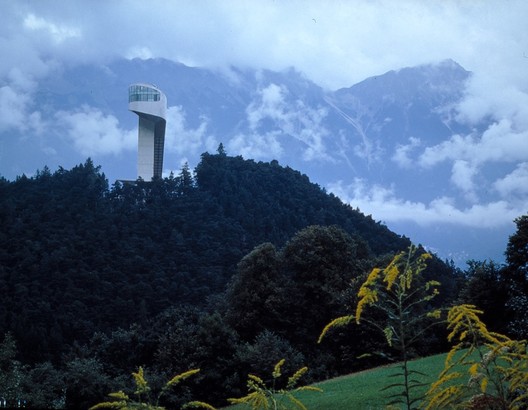