Born in Buffalo, New York to a Russian Jewish immigrant family, Bunshaft studied architecture at MIT, earning his bachelor’s and master’s degrees in 1933 and 1935, respectively. Upon graduation, he spent two years traveling in Europe through fellowships earned at school, and then moved to New York to work with Edward Durell Stone. After a short stint with Stone, he joined Louis Skidmore of Skidmore, Owings & Merrill to work on projects for the 1939 New York World Fair. After a hiatus to serve in the Army Corps of Engineers during World War II, Bunshaft returned to SOM, where he was named lead designer of the Lever House.

The Lever House (1952) is noted as one of the first and the most influential of International Style skyscrapers in the United States, featuring a sleek, blue-green glass tower rising from a raised podium, and a roof garden that returned greenery to the dense urban fabric of New York City. After the success of the Lever House, Bunshaft’s designs continued to feature smooth, glass facades, expressed steel structure and corporate clients, such as the Manufacturer's Trust Company Building (1954) and the Chase Manhattan Bank Building (1951), both in New York City.

In the early 1960s, Bunshaft started receiving commissions from cultural and educational institutions. His addition to the Albright Knox Art Gallery in Buffalo, New York (1961) featured a glassy black box floating over a stone podium, and for the Beinecke Rare Book Library at Yale University (1963), he used thin panels of Vermont marble to allow filtered light to pass into the main space, a large volume housing a mountain of bookstacks. He also designed his own house, called the Travertine House, in the Hamptons in 1962, and the Johnson Presidential Library in 1971.

In the 1970s, Bunshaft began employing curves in his architecture, such as in the Solow Building and W.R. Grace Building in New York (1974) and the Smithsonian Hirshhorn Museum (1974) in Washington, DC (for which plans for an unusual addition by Diller, Scofidio + Renfro were recently scrapped).

The final stage of Bunshaft’s career took place in Saudi Arabia, where he designed the 2010 AIA Twenty-five Year Award winning Hajj Terminal at King Abdulaziz Airport in Jeddah (1983), utilizing a grid of tensile tent structures to provide shade both indoors and outdoors to combat the brutally hot climate. Bunshaft’s final project was the National Commercial Bank Headquarters in Jeddah, completed in 1983, that features loggias at three different levels that Bunshaft referred to as “gardens in the air.” Leaving on a high note, Bunshaft claimed, “I think this is one of my best and most unique projects."

See some of the work completed by SOM during Gordon Bunshaft's tenure via the thumbnails below, and further coverage below those: 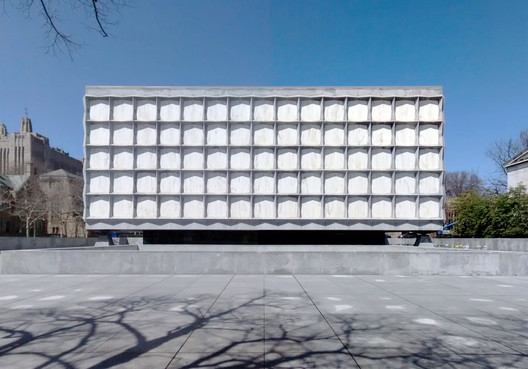