International architecture competition organizers Bee Breeders have announced the three winners and honourable mentions of their competition to design a Charlie Hebdo Portable Pavilion. Intended to be a travelling exhibition of the work of the French Magazine “Charlie Hebdo,” participants were asked to “support and promote” principles of free speech in their design. Responding to the terror attacks against Charlie Hebdo and the ensuing global discourse on free speech, the competition sought to deconstruct the “conventional assumptions of free speech,” and look specifically at “what makes speech free and how much of it comes at a cost.”

Entries were judged for the way they challenged these assumptions in terms of space, material and form. Preference was given to projects that had clear concepts, circulation, sequence and narrative, in addition to public engagement and a “reconciliation between the abstract and theoretical with the physical and real.” Consideration was also given to the way projects contributed to a discourse – rather than expressing an opposition - concerning the growing grey areas between "ideological, political, and cultural binaries." 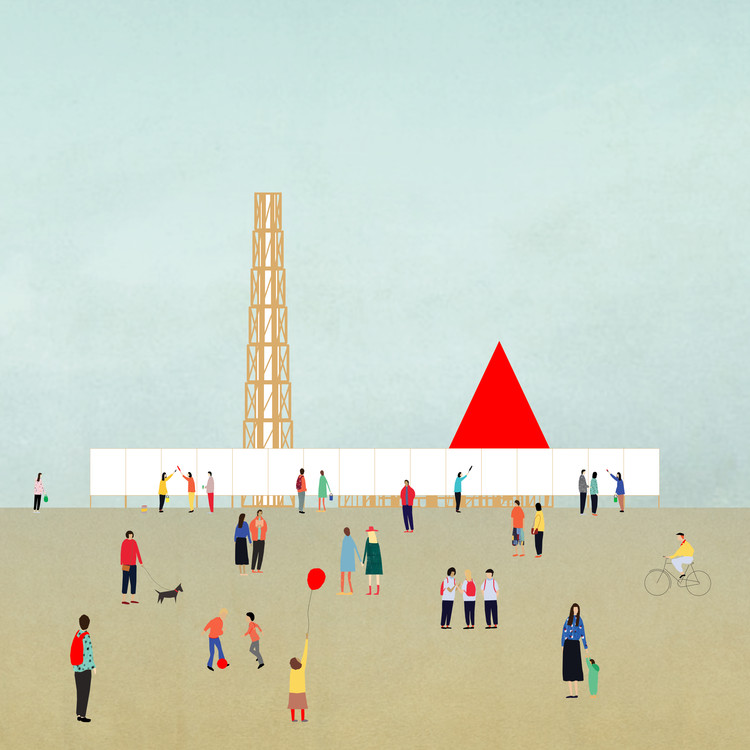 Using a “universalizing architecture of silence”, the 3rd prize winner transcends the ideologies present in other entries, breaking down “binaries between cultures, economic systems and political regimes”. A circular wall with a single entrance separates site from within, and two off-center circular walls create a progression of interiors. A mirrored exterior, and plain, matte interior with no prefigured function create a “territory of discussion, contemplation, and reflection.”

The second prize winner utilizes two distinct geometries – a sphere and a plane – to express its ideas. A massive balloon floats above the site, holding a steel roof afloat. The suspended ceiling creates a platform for engagement or individual contemplation. The balloon and roof – the sphere and plane – create an “analogous contrast”, engaging the metaphysical and metaphoric with its play of lightness and heaviness. Its universal form and monumental qualities pay homage to an “enlightened ideal, and the sacrifices of those who have pursued it”.

Through its “selection, organization, and representation of autonomous archtypes,” the first prize winner creates a sense of “no-place (Utopia)”, allowing it to exist free of political bias. This results in a platform for liberated speech. Easels, organized in a “striated but ordered field condition” create space for expression, and are carved out to create “nodes of concentrated activity.” Although the field as a whole remains open, the easels individually act as walls, enclosing individuals while relating them to a whole. In both its design and representation, the project embodies free speech and the “spirit of expression Charlie Hebdo fosters.”

Find more details, including interviews with the winners and the honourable mention proposals, here.