French department store Galeries Lafayette has selected London based AL_A to transform their historic flagship store on Boulevard Haussmann in Paris. Galeries Lafayette selected them with the goal of “building the department store of the 21st century” which will be designed to bring a completely new shopping experience to customers. The remodeling of the 40,000 square meter store is scheduled to begin in early 2017.

AL_A’s proposal was chosen for its bold conceptual design, which focuses heavily on the traditional architectural of the site, while adding elements of modernity.

Nicolas Houzé, CEO of Galeries Lafayette and BHV MARAIS, said: “We are delighted to start this collaboration with Amanda Levete and her team to conduct the reinvention of this iconic Cupola building, which is also the soul of the Galeries Lafayette brand. Amanda has demonstrated her talent for radical thinking and reimagining built heritage, and I am confident that her innovative vision will serve our ambition to offer to our clients the department store of the 21st century.”

Amanda Levete, Director of AL_A, whose other notable projects include the soon-to-be-completed extension of London’s Victoria and Albert Museum and the redesign of the Selfridges store in Birmingham commented on the project, saying: "This store is an institution that has a special place in the life and identity of the city of Paris. Our commission is a fantastic opportunity to build on tradition to make a living contribution to the future of Galeries Lafayette and the cultural life of Paris. The exquisite craftsmanship of the original building and itslocation in the heart of Haussmann’s city are both elements we seek to celebrate as we move forward."

In February the department chain announced that it had commissioned BIG to design its new flagship on the Avenue des Champs-Élysées. 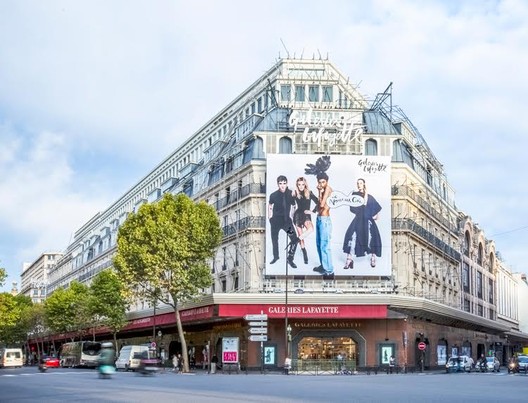