French department chain Galeries Lafayette has commissioned BIG to design its new flagship on Paris' historic Avenue des Champs-Élysées. BIG's first retail client, Galeries Lafayette hopes to position the project "as an upmarket department store for the 21st century" that will "endow the legendary boulevard with renewed cachet," according to a report on Business of Fashion.

Sited for 52 Champs-Élysées, the 7000-square-meter space will take its inspiration from the historic Art Deco building its housed in. As BIG described, they hope to enhance that space and respect the existing architecture, rather than radically transform it.

“We are inheriting a big, beautiful building that has been there for a century. So we are mostly moving around within it and playing with elements that have already been established. And I think it is going to feel like a joyful and playful environment for people to shop,” said Bjarke Ingels.

The store will include a number of highlights, such as a flexible event space marked with a translucent floor dubbed "the circus," an "observatory" that overlooks the avenue, and a restored skylight that will behave "in a similar way as when the clouds move over Paris," says Ingels.

“It has to be, somehow, the biggest concept store that has been built on the Champs-Élysées,” says Nicolas Houzé, chief executive officer of Galeries Lafayette.

"We wanted an architect who is able to understand the world like it is now, including sustainability, technology and customer experience,” said Eric Costa, president of Citynove, the property division of the Galeries Lafayette Group. 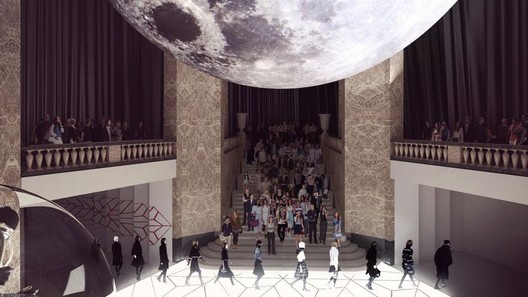