Save
The Met Breuer: A Loving Restoration of a Mid-Century Icon
Share
Or
Copy

The New York art world let out a collective cry of grief when the Whitney Museum of American Art abandoned Marcel Breuer's iconic 1966 building on Madison Avenue at 75th Street. Whether New Yorkers loved, loved to hate, or hated to love the old Whitney, Breuer's building suddenly became the building that evoked more passion than any other.

Now, thanks to a restoration led by New York City firm Beyer Blinder Belle, the iconic building has been transformed into the Met Breuer—the bold new showcase for the Metropolitan Museum of Art's renewed embrace of modernist and contemporary art. It will open to the public on March 18, 2016, and as the crowds ready to descend, the curators and architects are no doubt anxious to see whether, by faithfully adhering to Breuer's original vision, the restored building will succeed in both delighting museum-goers and helping redefine the Met's public image. 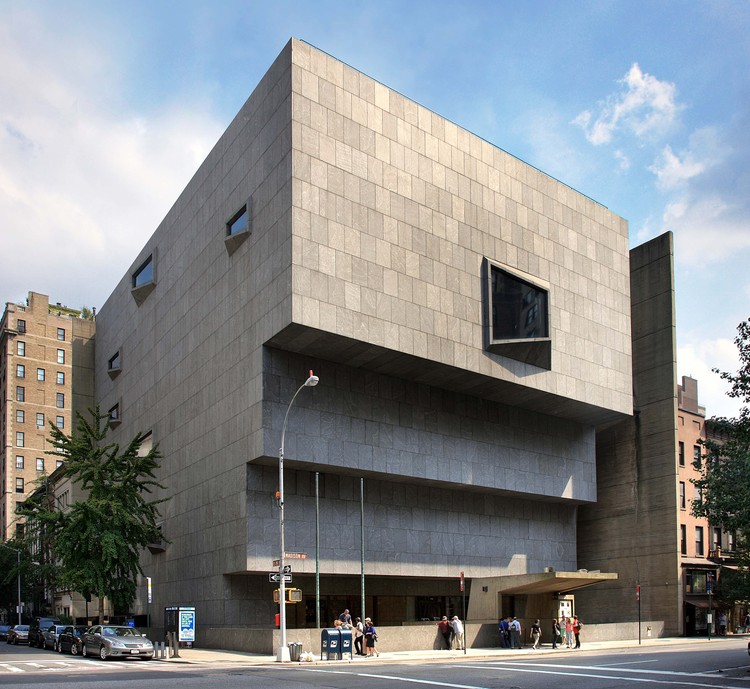 When unveiling the refurbished building, the Met's director Thomas P. Campbell called the building "a sculpture" that the Met approached not as a building to be repurposed as much as a masterpiece to be restored to its "purity and beauty."

To do so, the Met turned to Beyer Blinder Belle, who have already worked on many other mid-century masterpieces, including Eero Saarinen's TWA Flight Center at JFK Airport and Paul Rudolph's Rudolph Hall at Yale University.

Together with leadership at the Met, Beyer Blinder Belle established four key goals for the project:

Restoration of Spaces and Materials

To restore the building to Breuer's original vision, Beyer Blinder Belle had first to "remove the detritus that builds up in any building over time," said Campbell, ranging from makeshift wiring to gum stuck into Breuer's tempting textured concrete walls.

Then the firm had to find ways to revitalize Breuer's materials without stripping away its patina, or what Beyer Blinder Belle calls the "dignity of use and time." In fact, this natural aging process was a vital part of Breuer's original vision, according to Beyer Blinder Belle, and he deliberately chose materials with "use and time" in mind. For example, the textural and tonal irregularities of his roughly textured concrete tend to hide and distribute the effects of wear and tear, while still aging like brick or stone.

A symphony of neutrals, Breuer's materials include terrazzo, board-formed and bush-hammered concrete, bluestone floors, walnut parquet, and the famous gray granite of the façade, which Ada Louise Huxtable described by as "one of the handsomest stones to be seen in New York." For each material, Beyer Blinder Belle had to come up with a different set of restoration techniques. For example, they were extremely conservative in cleaning the concrete, but where patching to the original walls had grown discolored, they treated the walls with poultice and/or over-painted so that the patch would blend into the surrounding walls.

When it came to the bluestone floors of the lobby, they were more proactive, while still maintaining the lightest of touches. In Breuer's original design, the bluestone was supposed to have been dark grey slate. To achieve an effect closer to Breuer's vision, Beyer Blinder Belle cleaned but did not strip the bluestone. Then they applied a low-sheen wax, resulting in a darker, more neutral shade that restores the subtle tonal harmonies Breuer originally strived for.

Breuer wanted the museum's ground level to be inviting and intimate, connecting the life of the street and the more closed world galleries via a welcoming bridge and small but transparent lobby. His plan succeeded, at least when the museum welcomed 1,000 people a day. However, all parties lamented that ground floor on a busy day, when 3,000 to 5,000 people streamed through. Instead of inviting and intimate, the museum's threshold could feel at once chaotic and claustrophobic.

Here, Beyer Blinder Belle had to be more proactive. Yet their interventions are practically invisible. First, they minimized retail space. Then, to move people through more quickly, they increased the number of ticket sales points, added self-service kiosks and armed Met staff to serve visitors with mobile devices.

In addition, new, more coherent wayfinding and code signage now guide visitors more organically up to the galleries, down to the lower-level restaurant and cafe, and toward facilities like the rest rooms and coat check.

The 1966 building required significant updates to its safety and security systems. However, the new systems had to remain as invisible as possible—an especially difficult task in a concrete building. Many older systems had become obsolete and could be removed with relative ease. Then new systems were carefully concealed so that they do not "distract from the beauty of the monolithic interior finishes," says Beyer Blinder Belle.

Breuer and Revamping the Met Brand

Ask anyone to picture the Met, and they will probably come up with a timeless-seeming concatenation of Great Masters, Egyptian temples, Greek marbles and that marvelously stodgy Beaux Arts facade. The new Met Breuer does not exactly blow up that old Met brand, but it will certainly expand the public conception of the august institution in ways that the existing modernist and contemporary galleries, hidden within the marble labyrinth of the massive Fifth Avenue building, never could.

Indeed, the Met has embedded the Breuer's in the name of their new facility, emphasizing how the building's modernist architecture is central to the building's new mission.

"This is a masterpiece of midcentury architecture, and we're going to be reactivating it with a new curatorial spirit and reweaving it in new ways into the cultural fabric of New York City," Campbell said.

Robert Landon is a New York-based writer who has covered travel, architecture and design for nearly 20 years.