Hong Kong-based architecture firm TheeAe has released the plans for its entry to the competition for the Varna Regional Library in Varna, Bulgaria. The competition called for proposals to combine six regional libraries into one new site, ultimately awarding Architects for Urbanity the first prize.

TheeAe's proposal focuses on accommodating the site’s zoning, creating a sloped roof that allows for sunlight to shine down to surrounding buildings.

Books are stored in roughly 5,000 square meters around the building, 80 percent of which is located on the fifth floor. The remaining books are shelved vertically at a transparent storage core visible from the outside, so as to showcase them to the public.

The rest of the building is covered with horizontal white metal fins, which “are distributed randomly, yet arranged enough to block out direct sunlight based on the orientation to the sun.”

Underground space is connected to the storage core, allowing visitors to “experience the library even when they drive down to park their cars.” The ground level, first floor, and second floor, are occupied by the lobby entrance, event space, and staff offices, which access the storage core separately from public circulation.

Learn more about the proposal here, or about other proposal entries here. 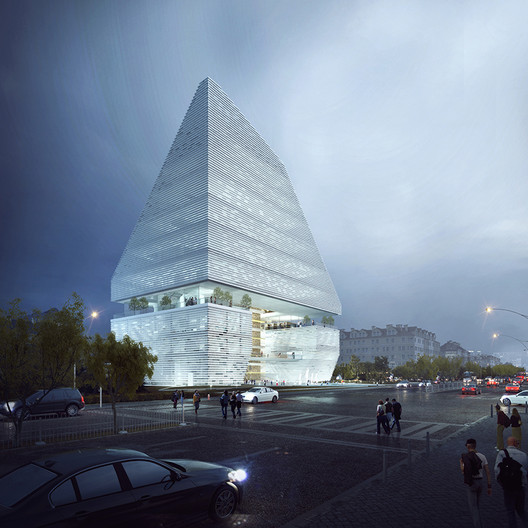