Save
With "Ordos – A Failed Utopia," Raphael Olivier Captures the Contradictions of Chinese Construction
Share
Or
Copy

For the past quarter century, China’s rapidly expanding economy provided architects with an almost endless supply of building opportunities. Easy lending allowed for an exponential rise in infrastructure projects – China used more concrete in three years than the United States used in the entire twentieth century. But in a country where the number of cities with over a million inhabitants jumped from 16 in 1970 to 106 in 2015, the speed of development enabled high profile, but flawed, experiments alongside the many necessary building projects. There is perhaps no better example of this phenomenon than the city of Ordos. The Inner Mongolian metropolis – home to 100,000 – which sprang from the northern desert in the mid-2000s was designed for over a million inhabitants. The reality of the city came to public attention in 2009 when Al Jazeera wrote about an early uncertainty in the Chinese real estate market.

After living in China for a number of years, photographer Raphael Olivier finally gave in to the nagging urge to see Ordos for himself. Visiting last year, he found a well-maintained city that is still largely uninhabited. I interviewed Olivier about the project, his views on Ordos, Chinese prosperity, and what it means to photograph architecture. 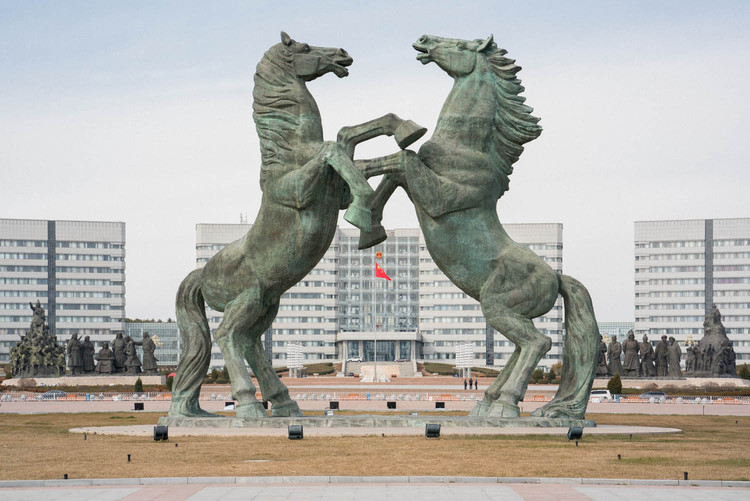 Vladimir Gintoff: Do you have a particular vision in mind before you visit a place for how you’d like to photograph it? And had you researched Ordos extensively before you went, or did you just have a basic sense of the city and an interest in seeing it?

Raphael Olivier: Ordos is a pretty well known city which has been covered by numerous photographers and journalists, being featured quite widely in the international press. This is how I heard about Ordos too, like most people. However it felt throughout my research that all articles and images I could find were very similar, just a few pictures of key landmarks and empty streets to illustrate a classical text about the over-ambitious construction frenzy of China. I couldn't find anything more than this cliché documentation and definitely not much striking, consistent and thorough work focused purely on architecture and human interaction in this bizarre urban environment. So my goal was to travel there and explore the city slowly, taking the time to wander around less famous sites, and photograph these various spaces in a cohesive way.

VG: How would you characterize the experience of being in a place that feigns human activity, but is actually devoid of it? I for one keep thinking of that first scene in the film 28 Days Later where central London is a ghost town after a viral outbreak.

RO: Let's be clear, Ordos is not totally empty, there are about 100,000 people living there. That's about 10% occupancy, mostly concentrated in the small city center, where it feels almost like any other boring Chinese third tier provincial town with a few hotels, banks, restaurants and even a McDonald's. But immediately outside of these few "busy" streets begins the weird eerie emptiness, where human activity is scarce. In the photographs with people, I would sometimes wait 10 or 15 minutes for someone to pass through the frame, and if I missed the shot I would wait 15 minutes more for a second chance. For miles and miles, the landscape is one of post-apocalyptic quietness with half-finished housing projects, decaying monuments and odd futuristic structures sprinkled all over the place. There were many moments when I felt just like in those films, like the last human still alive, walking on dusty deserted highways, only holding a camera instead of a gun.

VG: When you were taking the photographs, were you thinking about who the audience might be for the work? Specifically, I’m wondering how people from China might (or have) reacted to images?

RO: I have never thought about an audience for this project, in part because I felt the topic of Ordos was quite well covered already. This work was basically just me having fun, without much thinking. From what I've heard back from the Chinese audience online, comments are in the line of "what a waste of money, why isn't our government doing something more useful?" Chinese people are very aware of the wide-spread corruption and irresponsible spending from local authorities, and they widely criticize it online.

VG: What I find so eerie about these photos is how clean the city appears. Is the city’s infrastructure complete – electricity, sewers, etc?

RO: The cleanliness is not an illusion, Ordos is very clean. Since the city is located in the middle of the desert with a vast majority of its area is totally abandoned, there is very little pollution. It's actually quite refreshing for China. Even in the city center, there are more municipal workers picking up trash and watering plants than real pedestrians. One could say the city's infrastructure is complete with "Chinese characteristics"; another way of saying it is that the infrastructure is "more or less" complete, good from afar and far from good. Yes there is electricity in most places, but very poorly set-up. There are sewers too, but a giant flood in front of a downtown bank is all too common. Everything is built fast and cheap, without any long term vision. In many residential compounds the buildings are officially finished with people living inside, but there is still plastic protection film on the windows and the elevators are still the rusty metal construction elevators. Cars downstairs are parked on bare earth, and people are planting small improvised gardens on these unpaved parking lots. There is a lot of DIY involved in people's daily lives, just like everywhere else in China.

VG: Most of the images are exteriors, but there is that one really imposing shot from the field of the stadium – did you have to request access to the facility or is there a general lack of impediments?

RO: It was not very clear to me if the stadium was still under construction, ready to host an event, or already abandoned. There were guards in uniforms smoking cigarettes at the main gate, I just passed in front of them saying I was going inside for a few minutes to have a look. They didn't seem to care. Once inside the stadium the seating area was open access, but the field was closed. However I found one gate that was kind of open, open enough for one person to pass through anyway, so I just went in. I ran into a couple more guards there and I just said hello, they said hello back, and there was not much more talk.

VG: The only other time we are exposed to these types of landscapes – “urban” areas without humans – are in ancient archeological sites or film studio backlots. With that it mind, did it seem more like a movie set or a newly minted ruin?

RO: In many ways Ordos reminded me of those retro-futuristic cities of Soviet-era Siberia, today completely in ruins like some abandoned space stations. The arrogant and overly zealous monuments, the massive model housing blocks, the flamboyant futuristic super-structures supervised by under-skilled and bored-as-hell officials, the pathetically optimistic Olympic stadium. It does feel like history just repeating itself, with a modern edge. China today has more money, more technology, more manpower, so the results are proportionally more impressive, but the essence is more or less the same.

VG: As someone who has spent a good deal of time in China, did Ordos seem like an amplified version of what is happening all over the country or something unique unto itself?

RO: Ordos is similar to what is happening all over China in the sense that it is new city built from scratch over a short period of time and trying to become a new urban center in the region. There are hundreds of such example all over the country, massive cities mushrooming overnight with moderate success. However the case of Ordos is unique in terms of aesthetics. Most Chinese cities all look identical with endless residential towers, large shopping malls and a bunch of modern skyscrapers, while Ordos comes across as an UFO. Many Chinese cities try to feature contemporary architectural elements in their skyline, but Ordos feels like it's exclusively made from spectacular, conceptual buildings. Also, Chinese cities tend to be a large chaotic mix and match of private real estate developments, while Ordos definitely has its own pre-designed landscape and feels overall like a "curated" project.

VG: The city strikes me as a kind of allegory for a country of great prospect and possibility, but a lack of self-derived vision (as in, looking towards the West and what a city “should” look like – instead of developing one that is characteristically Chinese). Does that come across in real life, or do the photographs add a clinical layer?

RO: Indeed, modern China has a deep self-confidence issue. Of course Chinese people are more than happy to show the world how prosperous and economically powerful they have become, yet for historical and political reasons the country is now experiencing an immense identity crisis.The country is in a rush, which doesn't allow much time to create its own urban identity but rather need to get inspired by its rival giants and add a bit of Chinese elements on the surface for the local touch. But in the process of doing so, on such a large scale, in such a short time, the truth is that China today does have its own urban identity. The sad thing is that it's terrible and I think my photos try to capture a bit of that.

VG: You title the project “Ordos – A Failed Utopia” – do you think if the city had gained inhabitants and projects like the 100 Villas had been completed as planned that the outcome would have truly been utopian, or is aspiring to these ideals but a marketing strategy?

RO: If Ordos had gained inhabitants and if projects like the 100 Villas were completed, the city would be even more fascinating to photograph today. It would be so interesting to see how people use this unique urban space. Chinese people moving into cities today are mostly farmers, they are not used to the codes of conduct of big cities, they just live their lives day by day with available resources. Of course the outcome would never be utopian – here are some of the poorest people on Earth suddenly shifting from life in yurts and coal mines to high-rise buildings and art museums, it's not going to work out. But some people there, somehow, think it will. And that's the beauty of it, all these in between spaces and situations, the power of dreams, the will of man to always become greater. I hope people looking at my images today are not laughing at China but rather thinking wow, these people there might not always be successful in their plans but they have an amazing power to create things.