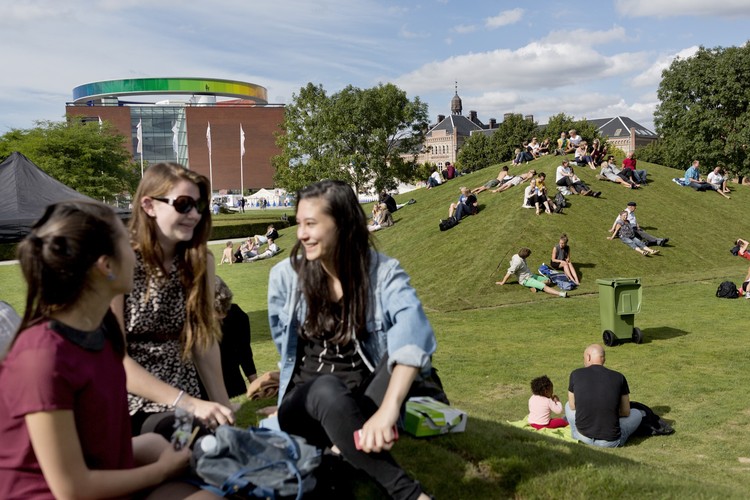 The first "experiment" was performed in 2010 when Schønherr created "The Forest," a landscape of artificial hills opposite the Cathedral in the city's central square. The intervention led to the sudden appearance of hundreds of large trees in a normally empty space, including an undulating surface with moss and grass. This park not only filled the area with new fragrances, colors and sounds, but also had an impressive turnout that surprised even the festival organizers.

In 2012, inspired by the popularity of the previous project, the architects met again with the organization to raise "The City Park." In this case, the green areas in front of the municipality and the Musikhuset (Music Theatre) merged to form a large green lawn that covered one of the busiest street of the city, blocking the passage of cars for two weeks. The park created a new perspective for the citizens of Aarhus as well as a new way of moving in this central point of the city.

Two years later, "The Plaza" project addressed two areas at once: the new culture area around the remodeled former railway station and the square in front of the passenger railway terminal. These two areas lack a natural connection and the square in front of the station is normally occupied by cars. The aim was to recover this parking area opposite the station to reveal its excellent proportions as a public space, at the same time to directing the flow to this new cultural area. Again the traffic was stopped (except buses) by a thick layer of sand and gravel that erased any traces of the sidewalks and streets.

These projects, which began as playful ideas to support the festive atmosphere during the event, have become a completely new way of working with the urban design; a methodology for large scale work. Their different configurations and spatial possibilities can be tested in the field, before being replicated or implemented permanently.

Based on the experiments of the festival, the Municipality of Aarhus invited Schønherr to design a new scheme for Bishops Square (Bispetorv). The goal of the project is to use the same basic ideas of dialogue, full scale construction and temporary interventions as the central elements in a design process that involves both the city and its citizens.

The project seeks to return the square to its citizens, creating a vibrant urban space where the activities are based on the needs of the people instead of cars. For this, the architects are working with three groves of trees that they will be joined by an inclined surface of wood, allowing visitors to sit and play. The surface matches the natural inclination of the square and creates areas that can be used to drink a cup of coffee, sit and watch artistic performances or for children to play with their sleds in winter.

The project descriptions were adapted from a text by Schønherr