Clad in cedar, the single-story 80,000-square-foot building will be fitted with removable partitions so that the layout can be changed overtime. It will include 17,000-square-feet of exhibition space, a 20,000-square-foot high bay storage area accessible to the public, a 250-seat multi-purpose room, cafe, gift shop, play area, workshop space and more.

"Ultimately, the jury awarded the heneghan peng/Kearns Mancini scheme for exemplifying the lightness and sublime functionality of the canoe. The museum design breaks with ego-driven architecture to offer a gentle, organic space that poetically winds its way along the Trent-Severn. No matter where you are inside the museum or outside standing on its roof, you will always be able to see the water, and a canoe waiting to be paddled by you. I can’t wait to see this museum built. It’s going to change the way we think about architecture, place making and the canoe - a true icon of design," added the jury. 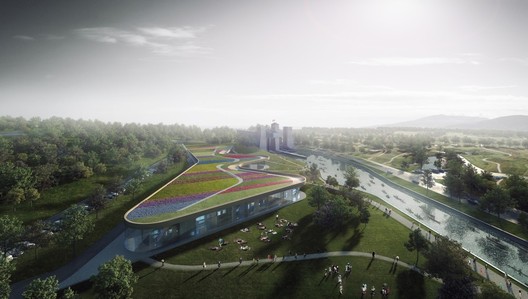