Winter is the perfect time to build structures with ice, a time and a technique that together offer the possibility of a pure white architecture. With a cloudy sky the condition culminates into an impressive whiteout: white architecture, the landscape and the sky dissolve into a diffuse unity without a visible horizon. If clear skies emerge a subtle contrast of warm and cool white appears with yellowish sunrays against the blue sky. However, the ice itself has striking effects as well: The surface appearance ranges from crystal clear glass to soft opaque impressions. And, for the long nights, illumination achieves an additional magical glow and extends the short daylight time.

Worldwide, snow shows, ice hotels and festivals have attracted numerous visitors with glistening snows and stunning lighting solutions. Futhermore, this frozen water strategy presents a sustainable solution par excellence, where the manufacturing and even disposal causes no harm to the environment. Read on to explore the coolest projects and events featuring architects and artists from Finland to China. 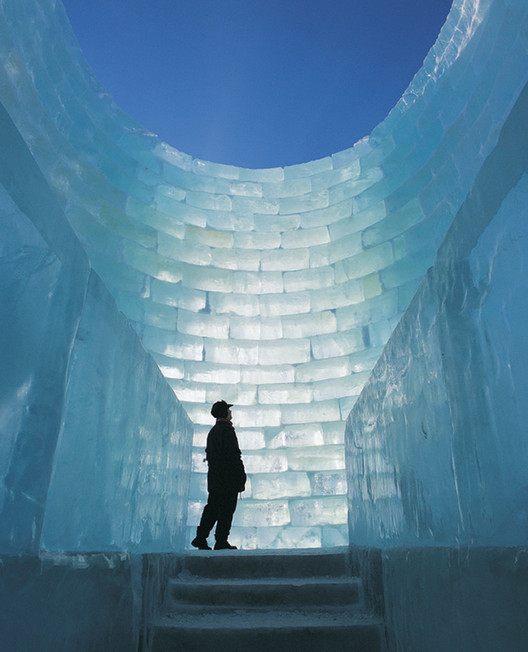 The Snow Show in Lapland, Finland, in 2003 and 2004 was a first-of-a-kind curated exhibition for an international collaboration between leading artists and architects. Lance Fung invited architects including Zaha Hadid, Morphosis, Diller + Scofidio, Asymptote and Tadao Ando for this project, which partnered with international artists. Thirty structures made of ice and snow revealed various conceptual and architectural possibilities for the visual and practical arts. The teams transformed their unusual building element into a cool light experience – ranging from transparent, to opaque and colorful and even to glowing effects.

Jene Highstein and Steven Holl created a sky observatory, called the “Oblong Voidspace”, with 500 cubic meters of ice. An ice stairway led up the cube, which opened to the sky – reminding the art community of James Turrell´s contemplative Sky Spaces. At daytime this cube appeared magical and translucent with the sun in the background and one could observe figures moving inside. But in dull periods the structure turned opaque.

In contrast, the team of Lawrence Weiner & Enrique Norten played with rows of double walls for their project “Obscure Horizons.” Colored water formed bluish and greenish blocks, and the work achieved a less transparent impression but instead conveyed a multicolored image for the usually white shades of ice.

Another remarkable project was the “Ice time tunnel” by Tatsuo Miyajima and Tadao Ando, which included a sequential element with tiny red light displays. 70 one counter gadgets moved from 1 to 9 representing the course of life. Thereby the dynamic displays anticipated the pixelated media walls.

Although the Finnish Snow Show exhibition was the first major international exhibition, frozen architecture has attracted an interest by tourism at several other locations. Ice hotels, for example, have emerged and converted traditional igloo construction into luxury destinations for a unique experience. Spaces with walls, ceilings and even furniture made of ice have appeared in Nordic Countries, Switzerland, Canada to Japan. The Icehotel in Jukkasjärvi, Sweden, has probably the longest tradition and was already founded in 1989. Creative artists work there with a wide variety of frozen surfaces: polished ice for striking mirror effects, snow for fine glistening impressions or picked ice surfaces, where the light is refracted in a diffuse way. In addition, the electrical lighting is often discreetly integrated and contributes to the effect that the ice itself glows. Cool bluish light colors underline the frozen atmosphere.

Harbin, China's eighth most populous city, hosts the world´s largest ice festival. Due to its Siberian height and its northern location with an annual mean temperature of 4 degrees celsius, and average in January of -18 degrees celsius the city is almost predestined for such an event. In contrast to the “Sun Island” area, where snow and ice sculptures are presented, the “Ice and Snow World” features numerous large ice structures forming a frozen city. The ice is taken directly from the nearby river with the help of swing saws carving the ice into blocks. The ideas for the ice park range from traditional Asian architecture to iconic buildings from Europe and Africa, like the Colosseum, the Acropolis or the Sphinx.

After sunset the white snow and ice fades and colorful illumination animates the frozen architecture. The white ice offers a perfect canvas for vibrant colored lighting, as the constructions are mainly lit from within for a glowing impression of the ice. Countless linear lighting fixtures lay a strict graphical pattern on the architecture. In some cases floodlighting from the outside achieves distinctive shadows for sculptural snow monuments. Further on, changing light colors introduce a dynamic component and grant the frozen city an intense liveliness for the festival. Thus, the artificial ice world turns into an imaginative stage to push aside the uncomfortable feelings of a freezing season and an almost uninhabitable location.

Light matters, a monthly column on light and space, is written by Thomas Schielke. Based in Germany, he is fascinated by architectural lighting. He has published numerous articles and co-authored the books “Light Perspectives” and “SuperLux”. For more information check www.arclighting.de or follow him @arcspaces.