Alongside a series of 2016 proposals, including the plans to transform Penn Station, Governor Andrew Cuomo has announced that New York will be expanding its Jacob K. Javits Convention Center - the busiest convention center in the US. Originally designed by James Ingo Freed of Pei Cobb Freed & Partners in 1986, the structure has undergone a number of renovations since; this time, it will be expanded by 1.2 million-square-feet, totaling 3.3 million-square-feet, with the addition of "the largest ballroom in the Northeast," new exhibition space, a four-level truck garage, and a 34,000-square-foot solar array.

“The Javits Center has long been an economic generator for this state, but we want to build and expand it to ensure it remains a premier venue for the next generation,” Governor Cuomo said. “Through one of the most aggressive development plans in the history of the State of New York, we are transforming one of our largest convention centers into an unparalleled, world-class venue. The new Javits Center will continue to garner millions in economic activity, create jobs and keep New York’s economic momentum moving forward.”

Construction is expected to begin in late 2016. 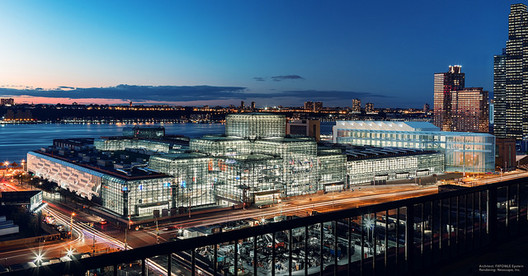