The Royal Institute of British Architects (RIBA) announced the President’s Medals Student Awards at a special event yesterday in London. The awards, recognised as the world’s most prestigious in architectural education, were inaugurated in 1836 (making them, including the RIBA Gold Medal, the institute's oldest award). Three medals in particular – the Bronze for a Part I student (Bachelor level), the Silver for a Part II student (Master level), and the Dissertation Medal – are awarded to “promote excellence in the study of architecture [and] to reward talent and to encourage architectural debate worldwide.” In addition to these, the winners of the Serjeant Award for Excellence in Drawing and the inaugural RIBA Research Medal alongside a rostra of commendations have also been announced.

See the winning projects and a full list of commendations after the break. 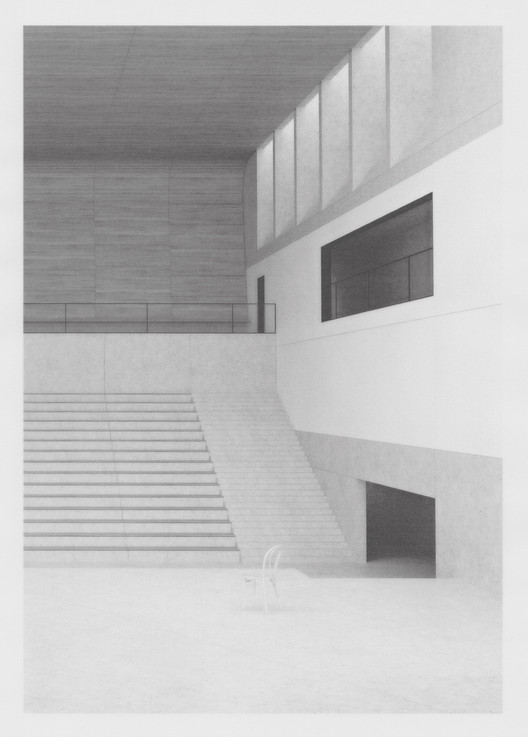 The Heteroglossic City: A polemic against critical reconstruction in Berlin

The project (tutored by Robert Mantho) investigates the historical background of Berlin’s highly-controlled planning system before setting out a new strategy for architectural intervention. This is illustrated through the ‘Bauforum’, a platform to explore a more dialogue-focused approach to each particular planning context.

Read more about this project in the RIBA Journal.

To explore the notion of flexibility in classroom design, the author researched schools in Amsterdam and Rotterdam designed by Herman Hertzberger, and also drew on his own personal experiences of school spaces in Malaysia. The project (tutored by Rhys Cannon and Colin Herperger) concludes that ambiguous, open-ended spaces rather than wholly flexible rooms provide the best learning environments.

Read more about this project in the RIBA Journal.

The Overlooked Back Garden: Voyeurism in the English back garden supervised by Harold Charrington

The dissertation explores the concept of voyeurism in the wider sense of people-watching to explore the tension between the private and the overlooked. The dissertation considers degrees of overlooking at different scales (from the city, the street, from within the houses, and from within the garden) by resorting to historiography, empirical data and case-study analysis, and digital mapping technology.

Read more about this dissertation in the RIBA Journal.

The RIBA President's Award for Outstanding Master's Degree Thesis went to Christopher Purpura, The Bartlett School of Architecture, University College London for ‘Holding Hands, Touching Alterity: Dance as Spatial Practice at Monte Verità, 1914’, supervised by Professor Jane Rendell and Professor Barbara Penner. The thesis is an account of the self-sustaining, anarchist community at Monte Verità set up by the architect-movement theorist Rudolph Laban in 1913. It focuses on a series of 7 high-definition autochromes, one of which is pictured here, taken by Johann Von Meisenbach around the outbreak of the First World War. An attempt to open up alternative histories of spatial practices, Purpura draws on feminist and queer critiques of Merleau-Ponty’s work on phenomenology. Described by the judging panel as ‘fascinating, compelling and elegant’, it tackles the fundamentals of architecture – body, space and movement.

The RIBA President's Award for Outstanding PhD Thesis went to Torsten Schroeder, LSE Sociology Department, Cities Programme with ‘Translating the concept of sustainability into architectural design practices: London’s City Hall as an Exemplar’, supervised by Professor Robert Tavernor and Professor Leslie Sklair. Schroeder’s doctoral thesis focusses on a single case study, London City Hall, to explore and interrogate a recent project that demonstrates the causes and effects of architects’ design decisions. Extracting a remarkable amount of forthrightness from his interview subjects about the power struggles between clients, engineers and architects, Schroeder charts the pyrrhic victory of form over performance in the design process that has led to resulting failures in environmental performance.

The RIBA President's Awards for Outstanding University-located Research went to Katrin Bohn and Andre Viljoen, School of Art, Design and Media, University of Brighton for ‘Second Nature Urban Agriculture: Designing Productive Cities’. What are the architectural and urban design consequences of a sustainable and resilient urban food system? What are the actions that will advance and enable the coherent integration of productive landscapes within cities? ‘Second Nature Urban Agriculture’ published in 2014, consolidates a systematic body of research undertaken over the last decade. This publication will be a valuable reference for any future research on urban food systems and sustainability.

The RIBA President's Award for Outstanding Practice-located Research and recipient of the inaugural RIBA Research Medal went to Walter Menteth, Walter Menteth Architects for ‘Pathways to Construction Procurement Reform leading to adoption and embedding of EU Directive 2004/24/EU’. Pathways to Construction Procurement Reform sets out to address why procurement processes, ostensibly set up to offer a fair, proportionate and open market, were having negative and unsustainable impacts on design talent accessing work; constraining opportunity, creative market skews and incurring excessive time and cost. Demonstrating tenacity and commitment, Menteth’s submission included books, articles, reports and conference papers showing a comprehensive investigation into the area of procurement reform of increasingly urgent relevance to the profession.

Juries for the Medals

See every entry to this year's competition (plus archived projects) here.