In this day and age, innovation is occurring at a faster rate than ever before. And while a majority of ideas may make a small impact before fading away, some inventions are able to slip through the cracks and become a real game changer in their field. Our field, of course, is architecture, and this year there have been no shortage of inventions that may change the way we live and work forever. In TIME magazine’s annual release of inventions of the year, at least 6 may have an impact on the world of architecture, encompassing inventions within the field of architecture itself and developments that could change how we design and experience space. Read on for those projects and what they might mean for our future.

Inventions Within the Field of Architecture

Dan Barach and James Ramsey’s idea to build a park out of an abandoned subway station has been bouncing around since 2011, when its creators used the crowdfunding website Kickstarter to raise over $150,000 towards building a prototype. The system uses a unique solar capturing system, filtering sunlight through fiber optic cable to provide formerly dark spaces with enough light to sustain plant growth. Naming the project in a nod to the 21st century’s most successful urban intervention, the Highline, the Lowline hints at a potential future where we can activate underground, windowless spaces into comfortable environments.

Designed by architect Michael Maltzan for Los Angeles nonprofit Skid Row Housing Trust, Star Apartments’ terraced layout creates a village-like atmosphere for LA’s homeless community. The complex features a ground-floor medical clinic, a garden, a running track and classroom spaces in addition to 102 300-square-foot studio apartments. The building’s inviting exterior and dynamic interiors encourage interaction and subvert traditional ideas of homeless housing. But the true innovation here may be in its construction - Rather than demolish the site's existing building, Maltzan decided to grow the structure vertically by lifting prefabricated units into place using a crane.

Big tech companies like Google and Amazon have been pushing towards using drones for delivery services for a few years now. However, the first fully realized drone-delivery infrastructure looks set not to be realized in Western capitalist markets but in Rwanda, where three “drone ports,” designed by Sir Norman Foster will transport food and medical supplies to the countryside through difficult terrain. The modular, arched structures make constructing in phases simpler, and also contain features such as a health clinic, a digital fabrication shop, a post room and an e-commerce trading hub, making the building an important civic center for the region.

Inventions that Could Change How We Design and Experience Space

If Google Glass and the Oculus Rift were to reproduce, you might end up with Microsoft’s HoloLens. The headset’s lenses are transparent, but contain holographic projection abilities, allowing for the most complete demonstration of “augmented reality” yet realized. Already being used by NASA to recreate Martian surfaces and by medical students to dissect virtual bodies, it’s not difficult to imagine architects embracing the technology to show clients how their renovation will open up their new space or even to build and interact with a 3D model on site.

Along with the HoloLens, virtual reality has seen several major steps forward in the past year. But while the HoloLens is innovative in its function, Google Cardboard has been revolutionary in its accessibility. The device is free and DIY, and can be assembled using a few simple materials and instructions provided by Google, or purchased from a third-party vendor. Then, simply slip in your smartphone and put on the headset to enter another world.

Tablet screens have for drawing have existed for some time now, but Apple’s foray into the drawing world has brought an increased precision and user-designed experience for illustrators and architects. Apple Pencil works just like a traditional graphite pencil works on paper - users can achieve different tones and width of stroke by how hard and at what angle they push and marks can be blurred or erased. Combining the best features of CAD type computer programs and traditional hand drawing, the iPad Pro will allow projects to be constantly updated in a manner that makes sense to the creative halves of our brains, all while syncing throughout all of our devices.

Check out TIME's citation of all six of these inventions, alongside 19 others from all spheres of innovation, here. 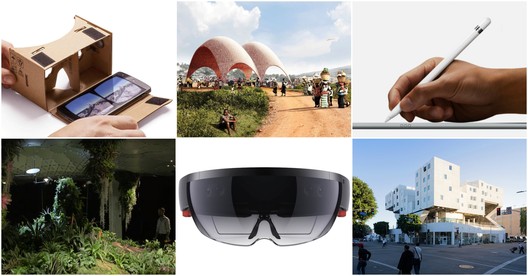