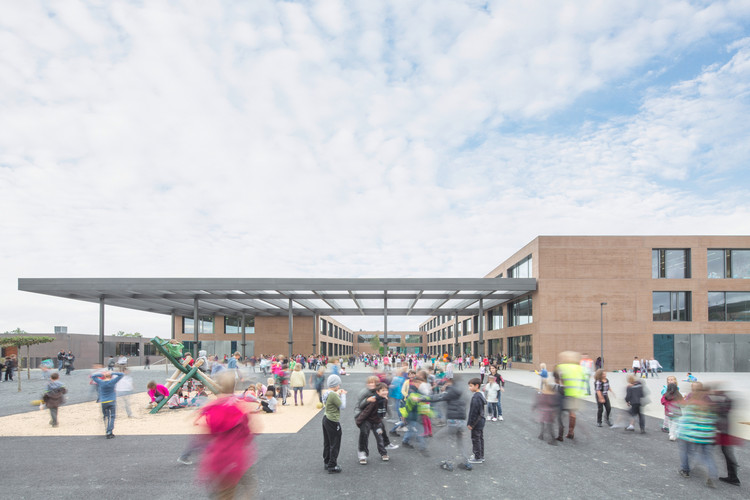 Text description provided by the architects. The Ecole Europeenne Luxemburg II should not be perceived as a solid block from afar, but was embedded in the landscape. This way there are no long facades to the outside, but instead a sequence of plazas with numerous spacial connections to the center of the ensemble.

The topography lowers towards the valley in the north west. The height change was used to layer the heights, to create an impression similar to a small city, that follows the topography.

The shifted arrangement of the buildings allowed to cluster the necessary access into smaller units. The ring shaped path and topographic height changes is inspired by a country road that partly follows existing tracks.

The design proposal makes use of the existing topography for a staggered arrangement of the school buildings. The ensemble is embedded within the western slope of the site and opens up towards the west where the landscape includes a protected green area.

All the schools are organized around an internal courtyard and equipped with a big canopy oriented towards the centre of the ensemble. The central courtyard area is a landscaped environment which continues the existing natural environment found at the top and bottom of the slope.

In regard to its buildings, a school in size of the Ecole Europeenne Luxemburg II does not only have an identity as a whole. The individual schools and facilities for the different age groups have the ability to develop independent spaces to learn and live. Those in turn can substantially contribute to the overall image.

The goal therefore was to design the different school units with their respective outside spaces as individually legible units. Each institution features their own building, with own courtyards and plazas.

This is not only the case for the individual schools, but also for the community facilities, which always take a special position within the overall ensemble.

Furthermore, it was important to give form to the unified idea of the Ecole Europeenne, and to create a continuous spacial experience, as opposed to isolated areas.

To display this bipolar idea of a unified direction of individual spaces, a system of spacial sequences and connections was created. Based on this is the concept to group the individual schools and educational facilities, as well as their respective outside spaces, around a common center. At the same time, each school has its own position and identity within the ensemble.

In this context, there should be a permeable relation between each building and the common center . The architectural image, that we developed includes large, open roofs as a connection between the respective urban plazas to the topographically terraced common centre.

Through this measure, each building has a kind of veranda with view to the central outside space. This space in turn opens up on the valleyside towards the landscape. The valley - a agriculturally used biosphere - reflects back into the internal outside spaces of the school.

The building with the public functions - restaurant, ballroom and administration - was situated on the highest position, featuring the best view.

Long visual axis additionally connect the individual courtyards of the schools with the voids on the opposite side, which lead to the surroundings.

The building masses looks calm and stable due to their proportion and division.

An important strategy is the generous proportion of the openings and the harmonious relationship between open and closed surfaces.

Thanks to their colouring, that orientates at the earth tones of the topography, the connection between the ensemble and the landscape is strengthened. Overall a warm atmosphere is created - the buildings embedded themselves into their surrounding. To emphasize that effect, the roofs, windowprofiles and metal surfaces are coloured dark.

The facadematerial - concrete that has been cast in wood - gives a loam-like character to the volumes and reflects in its slight irregularity the structure of the surrounding landscape. The buildings seem less abstract and the human craftsmanship becomes apparent.

The massive facade elements are firmly placed on the ground and give a calm and solid feeling to the buildings - as if they had been formed out of the topography.

The greenroofs, too, strengthen the feeling in the context of the landscape.

The interior is continuously defined by bright colours, which, in connection with the carefully developed colour concept for the large windows, create a unique atmosphere with strongly accentuated situations.

The architectural ideas about material and colour evoke associations to an oyster: Rough and earth-like on the outside, like the surrounding, smooth and bright on the inside, like mother of pearl.

When we look at the buildings of the Ecole Europeenne Luxembourg II, when we experience them from different points of view, a greater picture is formed. One experiences the differentiated spacial order, whose foundations arise from different factors and aspects. Those manifold influences had been brought together in an educated and artistic process, to create a concrete phenomenon.

A fundamental aspect was the program of the european-international orientated facilities with a broad spectrum of schools for all ages.

The pedagogic and organisational program includes different facilities, as well as central functions as cafeteria, ballroom or sports center. Another interesting and important aspect was the site and the embedding in the topography

the complex relationships of the built structure and their whole as well as seperated articulation are essential for the architectural result. This refers, for example, to the functional distribution and design of the many individual units and rooms to a complete system, that fulfills the technical, emotional and functional requirements.

The pedagogic and organisational program includes different facilities for all ages to form an integrated system.

The spacial, structural and colourful articulation and order of the buildings, in regard to their proportion, separation and material ultimately define the spirit and character of the built structures: The buildings shall show an openness, dependability and confidence, to become an interesting and sympathetic space to learn and live for children of all ages. 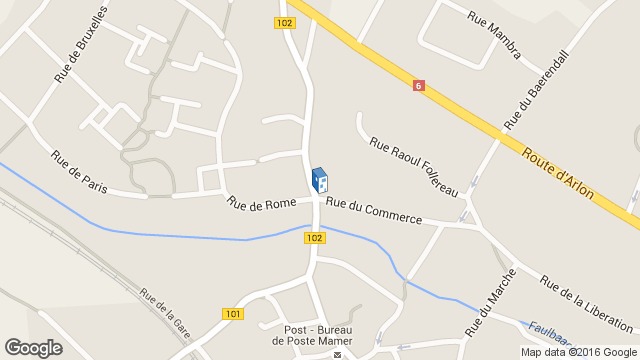 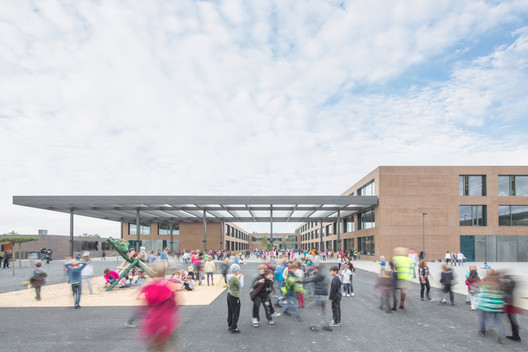