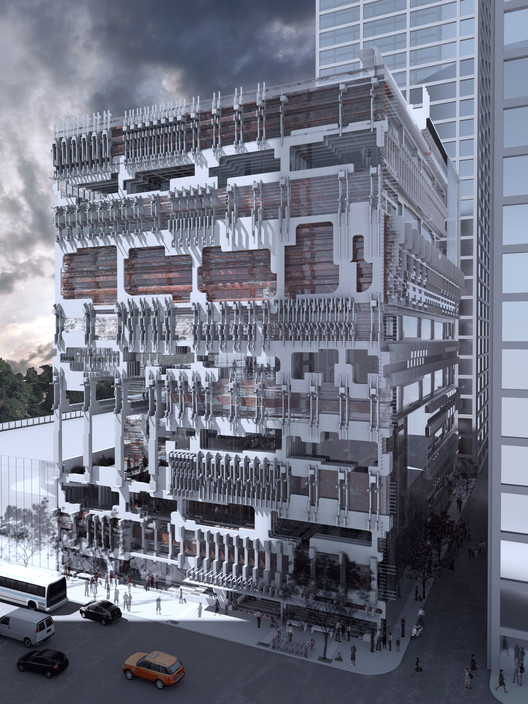 McCormick’s Chicago Tribune Tower competition came during the nascent years of the skyscraper, and served to produce the discussion necessary to address the question of what skyscrapers should and shouldn’t be. In the landscape of modern architecture, Layered Intelligence by mcdowellespinosa is a proposal for the CADE centred on the re-imagining of programmatic functions. Rather than separating the Centre based on the four different uses it houses, different functions are categorized according to their treatment of information and then reorganized through over 500 unique profiles, calibrated for their specific context. Spaces are created for presenting informating (levels 0-4); producing and consuming information (levels 5-8); and controlling and organizing information (levels 10-12).

The building reads as a layering of two material oppositions: hard, manufactured, precast concrete panels; and a soft, organic resin-hair composite. The resin-hair material transmits light throughout the building, adds visual screening, and provides thermal insulation to the building. The hair embedded in the compound is extracted from the excessive waste stream of human hair that travels from hair salons to landfills.

With its unconventional programmatic strategies and use of material, Layered Intelligence aims to re-affirm architecture’s need to be constantly examined and questioned, reimagining the mixed-use typology that has risen to prominence in the past decade.

The CAF is currently hosting a major exhibition featuring a shortlist of CADE submissions at the Chicago Architecture Biennial. The exhibition aims to reflect on the design of a Center for Architecture, Design and Education in Chicago, as well as highlight the city’s legacy of architectural leadership. The exhibition will run from October 1, 2015 to January 3, 2016.

Learn more about the winning projects on ChiDesign.