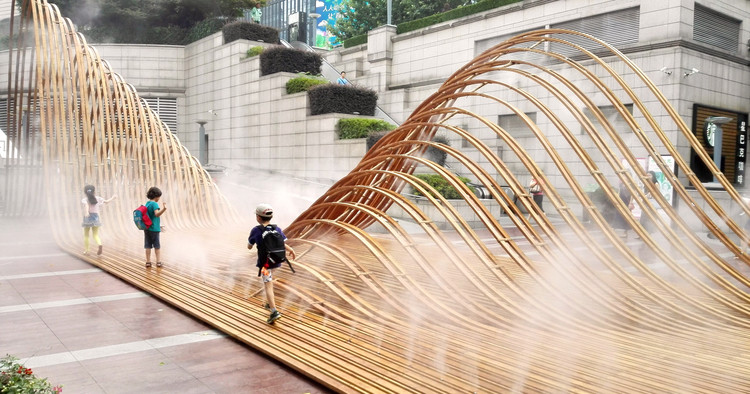 Text description provided by the architects. During the period of 2015.08.21 and 2015.09.10, there were a series of public cultural activities named “Gravitational Field——interconnections between architecture and public culture” helding in the Jing'an Temple Square, which is the most prosperous site in Shanghai. And one architectural installation -- 《Flexible Landscape》was born, which is both artistic and practical.

Jing'an Temple Square is relatively 7m lower than West Nanjing Road, so the installation is understood as a set of open landscape in this site, and looks like a bonsai of the city, getting involved with a soft and light profile. Two arc-shaped ridges scattered, as if mountains in the basin, cleverly responding to the open stage and the crowded metro exit.

Due to the square stone material ground does not allow any damage, the whole installation was impossible to has basis or ground fixation. And considering of the powerful typhoon damage, the designers eventually decided to adopt 50 pieces of streamline 20-meter long wooden bamboo forming a fluctuating body.

In the August of Shanghai, the temperature was scorching, this “arc-mountain ” provided space for abundant public activities in the square with the two shaded space. The water mist sprays hidden in the gap of frame continuing cooled the square. Meanwhile, mist-shrouded scene enhanced the sight of the visual impression of urban landscape bonsai. Under the summer sun, and occasionally appeared a rainbow on top of the mountain, which maked people feel relaxing.

Bamboo is one characteristic plant in China, and Chinese people like bamboo for a long time. “wooden bamboo” is made of advanced fiber by hot gluing technology, It has the characteristics of high strength and high toughness, making people feel more natural and familiar , and some sense of cultural belonging.

The installation itself was a work of art, as well as a space for other activities. A series of public events happened in this “Landscape Bonsai” one after another, here was the experimental field, theater, exhibition, market, playground. It inspires the vitality and creativity of the city, and displayed the open spirit of the city by an architectural way. 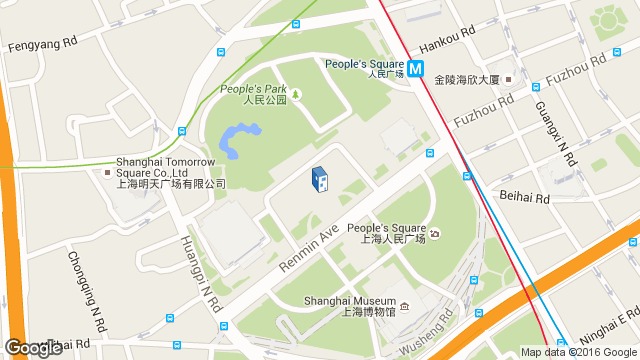 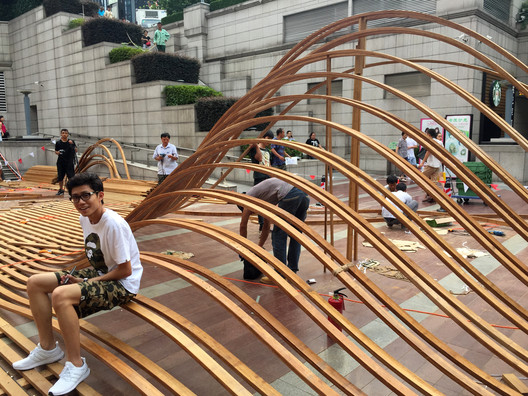 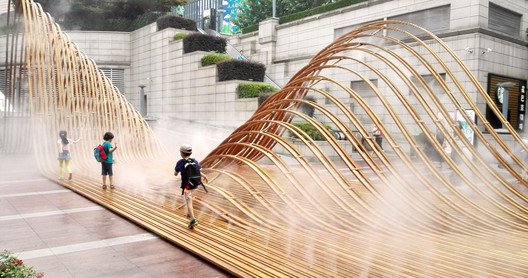