Timber buildings are regularly praised for their sustainability, as carbon dioxide removed from the atmosphere by the trees remains locked in the structure of the building. But what if you could go one better, to design buildings that not only lock in carbon, but actively absorb carbon dioxide to strengthen their structure? In this article, originally published by the International Federation of Landscape Architects as "Baubotanik: Botanically Inspired Biodesign," Ansel Oommen explores the theory and techniques of Baubotanik, a system of building with live trees that attempts to do just that.

Trees are the tall, quiet guardians of our human narrative. They spend their entire lives breathing for the planet, supporting vast ecosystems, all while providing key services in the form of food, shelter, and medicine. Their resilient boughs lift both the sky and our spirits. Their moss-aged grandeur stands testament to the shifting times, so much so, that to imagine a world without trees is to imagine a world without life.

To move forward then, mankind must not only coexist with nature, but also be its active benefactor. In Germany, this alliance is found through Baubotanik, or Living Plant Constructions. Coined by architect, Dr. Ferdinand Ludwig, the practice was inspired by the ancient art of tree shaping. 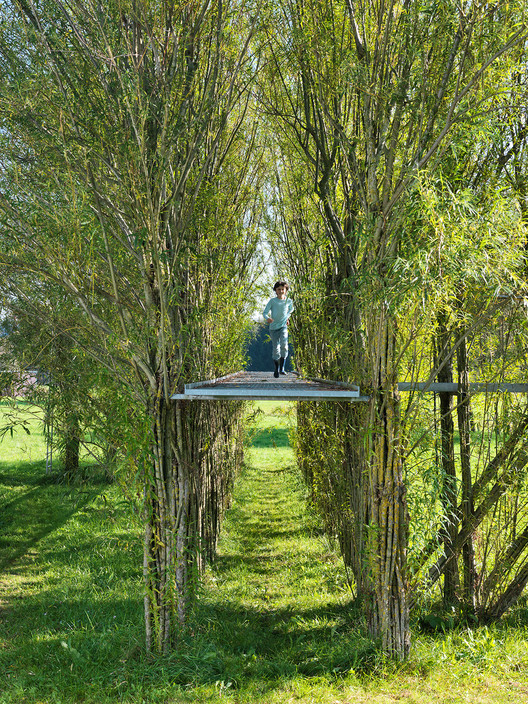 “I came in touch with some historic examples of living architecture while I was studying [at the University of Stuttgart] and was fascinated from the first moment on,” he explained. “The vision is a new way of integrating trees in architectural and urban design.”

As the name suggests, when shaped through a variety of means via pruning, bending, grafting, or weaving, trees can become extraordinary works of innovation. Early examples of living root bridges in Meghalaya, India, and the pleached hedge fences of medieval Europe reveal their additional value in the built environment.

Despite human intervention, this process can also occur in nature when trunks, roots, or branches in close proximity slowly fuse together. Known as inosculation, or approach grafting, it can arise within a single tree or neighboring trees of same or different species. Over time, as the limbs grow, they exert increasing pressure on each other, similar to the friction between two palms rubbed together. This causes the outer bark to slough off, exposing the inner tissue and allowing the vasculature of both trees to intermingle, in essence joining their lifeblood.

Ludwig’s Baubotanik, however, goes one step further. By incorporating a vegetal component to metal scaffolding and other construction materials, a living, breathing building is formed. Over time, as the trees age, their fused joints continue to strengthen, providing further load bearing support. Indeed, the ability of growing trees to incorporate foreign materials such as metal and plastic highlights the potential of Baubotanikal structures in urban design.

Unfortunately, not all tree species are suitable for such creative treatment. Ideal candidates must be flexible and vigorous with thin barks that can be easily grafted such as willow (Salix), sycamore/plane tree (Platanus), poplar (Populus), birch (Betulus), and hornbeam (Carpinus).

Ludwig elaborated, “For my PhD, I tested around 10 different species regarding their ability to inosculate. Plane tree, hornbeam, and beech joined very well and fast due to their thin, flaky bark. Those with a thick bark caused more problems when insoculated.”

Surprisingly, one top choice did not perform so well. “We used a lot of willows in the beginning due to their fast growth [and ease in propagation] from cuttings. However, we don’t use them anymore because they are not long lasting and the connection points between the plant and technical elements tend to rot.”

Even so, his early creations of a three-story willow tower, an osier willow footbridge and a silver willow bird watching station still stand, but not without some challenges.

Six years after the inception of the willow tower, Ludwig noted, “Heavy hailstorms, frost, fungal infections, and problems with the water quality all impacted on our growth predictions [for the fourth year], which fell behind expectations— a typical example of the influence of non-predictable factors.”

Thankfully, Ludwig and his close team of collaborators were able to solve these problems through selective replanting and technical adaptations. As a result, they have developed a system to cut back and replant certain trees without affecting the overall vitality of the structure. This system of redundancy allows losses of up to 30% of the trees without any adverse effects, but becomes more difficult to maintain as the structure ages.

The Plane-Tree-Cube, the largest baubotanikal building so far, incorporates sycamores instead and was open to the public during Landesgartenschau 2012, a regional horticultural show, in Nagold, Germany. A popular attraction, it was awarded the “Special Prize for Innovation” for Holzbaupreis Baden-Württemberg, a contest that judged unique buildings made from wood.

As a pioneer, his vision has also won awards for “Deutschland, Land der Ideen” (Germany: Land of Ideas), Übermorgenmacher (Creating the Day after Tomorrow), and Archiprix International, a competition in urban design and landscape architecture.

Ludwig, now an assistant professor at the University of Stuttgart, has found his role to be ever expanding. For the past year, he has served as a mentor and project leader for the University of Alghero in Sardinia/Italy. Hosting several design-and-build workshops for LandWorks, he shared his knowledge of processual design thinking with students from around the world through a hands-on approach.

Regarding future plans and goals, he replied, “We developed solutions to adapt to climate change in Stuttgart by using the potential of Baubotanik. This seems very interesting and urgent and we hope that we can contribute to this topic in the future.”

The value of Baubotanik should not be lost in today’s increasingly urban world. Unlike their dead lumber-based counterparts, living architecture continues to combat soil erosion, while providing oxygen, sustenance, shelter, and habitation. Trees can reduce storm water runoff and improve water quality through their roots. Moreover, they can even reduce energy costs due to their cooling shade. By reducing this energy demand, they in turn cut down greenhouse gas emissions.

As an integral part of the ecosystem, trees also convert carbon dioxide, a major greenhouse gas, into biomass, thereby mitigating climate change. But despite all these benefits, trees are still living things and must be treated as such in biodesign. Dr. Ferdinand Ludwig credits his success to being mindful of a key principle— to work out design rules that are derived from botanical rules of growth.

“If you do not respect the rules of growth in your design, the plant structure will not grow as you want it to and may even die.”

Only by working together with nature, only by cultivating a passion for the future of our world and our environment, can we truly move forward towards a more sustainable, balanced tomorrow.