The Royal Academy of Arts in London has announced the four shortlisted proposals in their Urban Jigsaw competition, which aims to generate ideas for the renewal of Brownfield sites in London. After appraisal of many high-quality entries, four finalists have been selected to move onto the next stage of the project. See the finalist proposals after the break.

“The continuing upward trend of rent prices … is forcing certain groups of people out of central London, including young artists and makers. To counter this we are proposing a live-work-teach environment including a central hub and a series of workshops on smaller brownfield sites [in and around Waterloo].”

“We seek to convert potential land redundancy from outdated public functions into additional capacity directly accessible to the local community. Imminent reform of the justice system offers an opportunity to apply this approach to a sector with inherent potential to support the social infrastructure requirements which need to develop alongside London’s growth.”

On November 16, 2015 and March 1, 2016, each of the teams will have their proposals publicly reviewed at free events. The competition will culminate with a 5 week exhibition opening on April 27, 2016. Find more details about the upcoming event here.

News and project descriptions via Royal Academy of Fine Arts 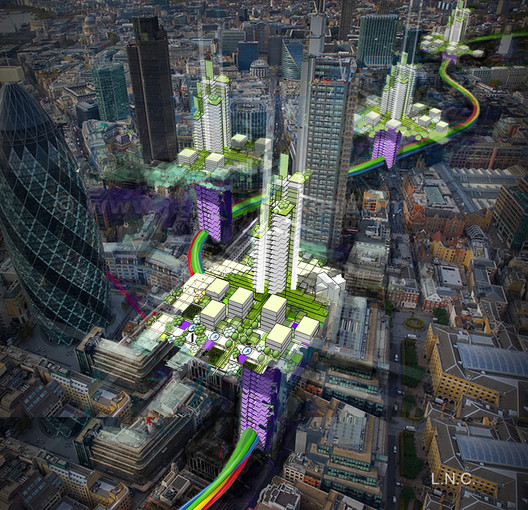