At this year’s Paris Fashion Week, Switzerland-based fashion house Akris showed its 2016 Spring/Summer Collection -- an assembly of garments based on the work of Japanese architect Sou Fujimoto.

Akris’ creative director, Albert Kriemler, was introduced to Fujimoto by photographer Iwan Baan while working on the Université Paris-Saclay. From a stance of admiration, Kriemler was thus influenced by Fujimoto’s work: "We share a vision to create an effortless relation between the body and the environment with utmost simplicity. Sou Fujimoto is an architect who understands that we have more senses than just the eye," said Kriemler.

Looks in the collection were organized into groups that correspond with specific architectural projects—perforated garments resemble the House of Hungarian Music:

One garment even utilized Fujimoto’s red ink sketch of his 2013 Serpentine Gallery Pavilion as a print:

Not all of the designs obviously resemble a specific project, but definite parallels can be drawn.

In addition to the garments themselves, a replica of Fujimoto’s House N was built into the top of the catwalk, and all of the models wore mirrored eyepieces that mimic Fujimoto’s glasses.

Learn more about the show here.

News via Dezeen and WWD and Akris. 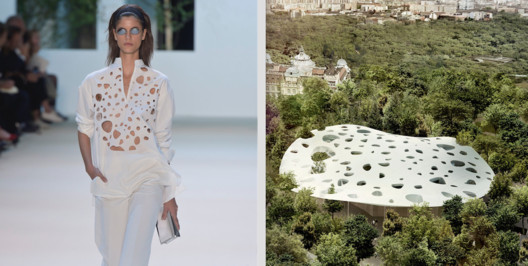