Text description provided by the architects. The Biotechnology building is within the Anahuac Mayab University campus, a building for research and development for companies seeking alternatives to renewable energy projects due to wind and solar radiation conditions that are particularly good in the Yucatan Peninsula, with very specific research needs within a dynamic international framework for innovation and development.

The first stage houses laboratories and spaces for companies that are supported by research developed in Mayab University.

Located in the west end of the campus, in a site with the possibility of future growth, the building seeks to impact the space as little as possible. It is a straight, thin building, oriented north-south, to take in the best lighting and ventilation. The order and geometry seek to recover the trace marked by the Master Plan, and to relate the open space and circulation with the new building, which will be a continuation of these.

The composition is achieved with only two elements, laboratories and work spaces as a central body, and the perimeter circulations which enable future connections with other buildings, resulting in a cool and airy environment.

The horizontal circulation not only articulates elements of the composition, but solves a number of continuities with the University buildings. It organizes the views and the space both to the outside and inside.

The new building is planned at the corner of the campus, creating a new facade which continues the existing route marked by the campus circulation. The articulation with the rest of the assembly is achieved with circulations. From a distance, it reads like a small building. The building is permeable to views, and is inserted into the campus lightly.

The Biotechnology Institute continues the same principle of correctly oriented linear buildings which seeks to capture the northern uniform light and to protect itself from southern sunlight. The new building has three levels. The scheme arises from differentiating the architectural program.

Perimeter horizontal circulation links the different parts of the program and allows future adjustments and organizational changes without losing its order. The main staircase articulates all levels and is located in the central part of the building.

The internal organization of the buildings arises from the analysis of activities. It ranges from the most public to the less public. From the outside inwards. From the open to the closed.

In relation to formal treatment, facades represent the organization without losing architectural unity, highlighting different functions. One language only: concrete brackets. The variation in the rhythm of both facades generates different forms depending on the sunlight and the views. More closed to the south, more open to the north.

The formal language is through exposed perpendicular brackets achieving a reading of the total mass and allowing ventilation and lighting. The formal treatment makes the project seem very light, allowing one to access naturally, emphasizing its public character. And its reading in perspective is perceived as a pyramid that is configured by a pair of inclined walls, referring to pre-Hispanic architecture.

With the sloping walls it responds to offices and support areas, and with the protruding brackets in the opposite direction and vertically to the research area. This double reading clearly defines the architectural program and is a gesture of receiving and responding to the Campus.

At the west end, the auditorium is located on the ground floor, closed with a treatment based on a pair of inclined solid brackets, thus reflecting the formal treatment of the architectural program

The slope of the east facade produces a garden space, which serves to protect from the sun and creates a fresh and airy feel inside. It takes the eastern dominating winds and directs them to the circulation. The levels generate garden terraces that open to the Campus and are contained by concrete prefabricated trusses that emphasize the geometry.

The north facade is developed likewise but vertically. The structure is the formal language, achieving an architectural and constructive whole.

We proposed the use of exposed concrete due to its low maintenance, developed through prefabricated elements that provide speed of execution, and to prevent affecting the daily life of the University.

The structural solution, is linked directly to the general composition of the building, this integration is established through rigorous modulation of the project every 90 cm. This achieves structural modules modules of 7.20 x 10.80 m.

For the selection of materials and finishes, we took into account the characteristics of the existing environment, so as to enable the integration of the building with the rest of the Campus.

The criteria for the use of materials is to use them in a contemporary way, from the exposed concrete as the main expressive element and shaping the formal treatment of the building, they are related through the compositional module that is expressed in the facades. The module governs all elements both in elevation and in plan.

The image arises from the very idea of representing the architecture of the campus, with a contemporary attitude and language, 30 years after the construction of the first classroom building at Mayab University. 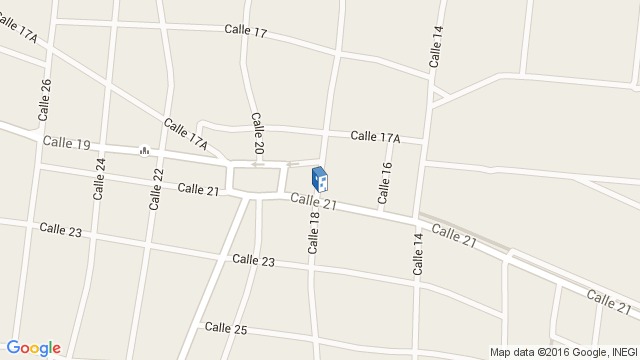 Location to be used only as a reference. It could indicate city/country but not exact address.
Share
Or
Copy
About this office
Augusto Quijano Arquitectos
Office
•••