Herzog & de Meuron has revealed their plans for a new £500 million stadium for Chelsea Football Club, intended to built in place of their existing stadium at Stamford Bridge. As reported by BD, the images and a model of the stadium were not officially released to the press but were presented in a public consultation meeting held by the club.

Herzog & de Meuron were appointed to work alongside the site's masterplanners Lifschutz Davidson Sandilands in January, and the recent public consultation and was the first opportunity to see the design for the 60,000-seat stadium in its entirety - however, partial renders were released in an earlier consultation in July receiving 92% approval from 1,250 respondents.

The design comprises an irregularly-shaped stadium which fills the site, featuring slender brick ribs - inspired by gothic architecture and the stadium's nearby Victorian-era brick terraces - around the entire structure. Above the pitch, the irregular shapes is resolved into a circular peak, descending towards the center of the design to form a rectangular opening above the pitch.

Visit BD's articles about both previous consultations for more images and information about the design. 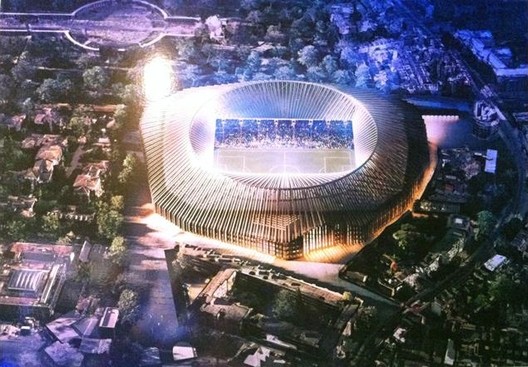