UPDATE: The news has now been confirmed. David Chipperfield Architects has been officially selected to convert the US Embassy near London's Grosvenor Square into a "world-class" 137-room hotel, after the building's current occupants relocate. According to a new report from AJ, restaurants, retail, a spa and a 1000-person ballroom will also be included in the design. The first images of the project have now been released.

As reported by the Architects' Journal, David Chipperfield Architects has been selected in an invited competition to remodel the US Embassy in London, once the building's current occupants move into the new embassy building currently being constructed in the Nine Elms. The existing building, a Grade-II listed design by Eero Saarinen dating back to 1960, is set to become a hotel after developers Qatari Diar purchased it in 2009.

The AJ cites anonymous sources stating that Chipperfield was selected ahead of Foster + Partners and KPF in a competition run by Malcolm Reading Consultants. However, they were unable to gain confirmation from either Chipperfield's office or Qatari Diar, who stated that "a range of options on the best use of this important site are currently being considered."

With the new embassy by Kieran Timberlake still under construction, staff for the US embassy are expected to vacate the building by 2017.

Story via the Architects' Journal 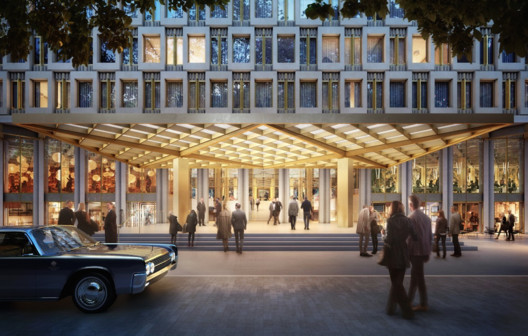