Over the past 20 years, Pixar’s films have attracted vast audiences around the globe. In worldwide box office sales its first film, Toy Story (1995) boasted $362 million, followed by A Bug’s Life (1998) $363 million, Toy Story 2 (1999) $485 million, Monsters, Inc. (2001) $525 million, and Finding Nemo (2003) a whopping $865 million.[1] Factoring in additional home theater movie rentals and purchases, along with cable, theme parks, and consumer products, the influence of Pixar on generations of children and their parents around the world has been enormous. In terms of global impact, no educator, no author, and no architect even come close.

While Pixar’s pioneering role in the world of cinema, storytelling, and digital rendering is already well documented, its links with architecture have yet to be fully explored. One of Pixar’s greatest, and perhaps overlooked, talents is its ability to create convincing architectural worlds adjacent to and within the human world we inhabit every day. Pixar worlds could become a new tool to encourage critical thinking about our environment.

Children, Pixar, and Possibilities: Why Pixar is an Ideal Learning Tool

In many ways, children’s films today are like the fables of the past, imparting universal lessons through storytelling. A large part of what makes Pixar successful in creating empathy and teaching these lessons is the anthropomorphism of its main characters, many of which, similar to the Sesame Street muppets, are not human. In fact, scholars have long been fascinated with both the positive and negative effects of animated Disney films and television shows like Sesame Street on children’s morals and social. Pixar films provide rich material for those interested in how children develop sensitivities to different cultures, whether fictional or not, and how children develop sensitivities to their environment. Pixar stories, too, can serve as valuable tools for educating future architects.

Similar to its parent company Disney, which purchased it in 2006, Pixar is a studio with lifelong fans. Many of today’s millennials grew up with Pixar and continue to find their films appealing even as adults. For example, despite being geared largely towards readers in their 20s and 30s, at last count the popular pop journalism site Buzzfeed has published nearly 50 articles specifically concerning Pixar films and studio culture. These films, largely targeting children, present opportunities to lay the groundwork for them to observe idealized environments, and may possibly influence how they see their world as adults. Many of today’s young architects are Pixar kids all grown up, and many future architects will grow up watching today’s Pixar films.

Our focus here is on Monsters Inc., Toy Story 1 & 2, Up, Wall-E and Finding Nemo. These films all occur in our own recognizable human world, or in a world adjacent to it, showing different aspects of our environment from unique viewpoints of characters who come in different shapes and sizes.

Architects and future architects have much to learn from observing Pixar characters and how they interact with their environment. The Pixar characters vary widely in their scale, shape, and physical ability and yet, they manage to find ways to maneuver around their environment. Conversely, the audience can see how much they struggle when their environments fail to meet their needs. Take for instance Monstropolis in Monsters Inc., a fictional city whose inhabitants are incredibly diverse; some enormous, some small, they slither or scuttle or walk, and yet they are all able to move comfortably throughout the city. In a scene that follows the main characters down their street we see how their homes reflect the individual personalities of their inhabitants, rather than cookie-cutter housing tract developments that typify our human world of American suburbia. In the eponymous factory, Monsters Inc., doors throughout the entire building are equipped with two sets of push bars at different levels to accommodate users’ different heights, exemplifying a sensitivity to accessibility and universal design. Monstropolis is responsive to differences among individuals, allowing its inhabitants to coexist happily and comfortably.

On the other hand, in Toy Story we can see how individuals living in a world not created for them can suffer. Similarly to Monsters Inc., Toy Story introduces us to a cast of characters of different sizes and ranges of motion. However, unlike Monsters Inc., these characters often struggle to get around in a world not designed for them: because of their much smaller scale, the human world they inhabit poses serious physical challenges.

In one instance, Toy Story characters must use mechanical vents as a means of transportation, much like the hidden, inconvenient backstage routes that wheelchair-bound individuals must often use to get around. Stairways and doorways present huge obstacles because of their relative scale and dexterity required to operate them. These films help audiences empathize with the plight of those with different levels of physical abilities who confront day-to-day barriers and with the physical and mental consequences of navigating through poorly designed environments. Pixar does an admirable job of showing both successful environments and unsuccessful environments, and uses this contrast as a means of driving the plot.

2. Sustainability and Relationship to Nature

Another common thread among the Pixar films is the relationship between the built environment and the natural environment. A large part of the Monsters Inc. plot is driven by Monstropolis’ need for “scream”. Screams of scared human children power the city and are collected at Monsters Inc. by professional “scarers”. As the need for energy grows, some monsters turn to more inhumane methods of collecting screams. However, the main character Sully discovers that even more powerful and less harmful energy can be collected through children’s laughs. An analogy can be made with fossil fuels and their harmful effects on the environment (such as oil drilling) contrasted with less invasive sustainable energy collection methods such as wind and solar.

Wall-E takes an even more definitive stance on our patterns of consumption, showing a world so damaged that we must abandon it because it can no longer sustain human life, and leads all humans to live a sheltered life of limited mobility assisted by technology. As designers of future environments, architects should consider how to encourage and integrate sustainable technology in their designs, and how to consider the biodegradability of materials in order to best reduce the environmental impact of new construction.

Finding Nemo shows us how in our own present day, we also need to be sensitive to our impact on the world’s non-human inhabitants. The main character, Nemo, is removed from his coral reef environment and dumped into a dentist’s fish tank. There we see how the other fish in the tank, through no fault of their own, are slightly unbalanced, only knowing a pet-store lifestyle. Architects designing for animals are responsible for their physical and mental wellbeing, and need to consider how to best suit their demands, rather than simply considering the needs of humans who observe them. By anthropomorphizing the fish in Finding Nemo, the audience can empathize with the impact that humans’ design choices have on their non-human counterparts.

In addition to the practical ways that architecture can address ethics in terms of accessibility and energy consumption, Pixar also shows us how architecture should go beyond the mere practical and reflect the personality of its inhabitants. Up demonstrates this well in the film’s iconic house. Two of the characters Ellie and Carl fall in love, get married, and buy a fixer-upper house. Through a montage we see how they make the house their own, and how Carl’s shy personality is reflected in the more understated furniture while Ellie’s loud personality is reflected in the colorful and quirky details in their home. In addition to traces of their individual personalities are collective objects that represent them both such as their piggy bank where they save for their future adventures. As French philosopher Gaston Bachelard argued in his classic book, The Poetics of Space, “the house protects the dreamer”. The house they filled together is a perfect reflection of their union and the audience can understand why the main character, Carl, continues to fight so hard to preserve it throughout the film. Beyond serving as a shelter, the house is a huge part of his identity and history.

Toy Story also expresses the importance of reflecting one’s self in their individual space. Although largely unseen, Andy, who owns the toys, renders a huge influence on the plot and other characters; his bedroom is a primary setting for the film. The protagonist, Woody, is a toy sheriff, and Andy’s longtime favorite, however his preference is usurped by a new toy, space explorer Buzz Lightyear.

As Andy’s interest shifts from Woody to Buzz, we see a montage of Andy’s room décor shifting from Old West posters, bed sheets, and knickknacks to space-themed décor. As this happens, Woody loses his self-confidence because his inhabited space no longer reaffirms his predominant role in Andy’s life, while Buzz’s level of confidence and symbolic importance in Andy’s room increases. Tension is created by the fact that while the environment continues to reflect Andy’s interests, it reflects Woody less and less.

Pixar shows us how much joy a building or space can bring people when it is a reflection of themselves, and to what lengths they will go to protect it. In some cases, an architect’s definition and the inhabitant’s definition of what is successful can conflict. These films serve as a reminder that architects should take care to design spaces that reflect their clients’ values in order to create buildings that their inhabitants will love.

Finally, Pixar reminds architects to reach beyond and design environments that create joy and wonder. Although Pixar shows worlds that are often congruent with our own, it also encourages its viewers to dream, to enjoy the “plausible impossible”, a term coined by Walt Disney referring to the unique ways animated films can make impossible feats seem real. In Up, we see an entire house lifted by helium balloons. In Monsters Inc. we see a world where traveling the entire globe is possible just through our own closet doors.

Pixar features worlds with endless places to explore and discover, encouraging viewers to think creatively, outside the box. Pixar also takes care to warn us what can happen when people lose this “joy” in their surroundings. In the film Wall-E, the entire human race inhabits a single monumental spaceship. The interior is overrun with digital advertisements where inhabitants live in their own isolated pods that run on preset routes throughout the spaceship and address every possible need on command, much like an immersive smartphone.

Although a technologically advanced environment, it provides few options to explore or connect with others, making for a dull daily life, and a lifeless society. Architects can take this as a reminder to create designs that are both unique and memorable.

Pixar is a studio widely recognized for its innovation, quality, and popularity. The fantasy worlds of Pixar films introduce young, impressionable children, their parents, and future architects to novel ways of thinking about their environment. They reinforce the importance of an ethical architecture: inclusive environments that address widespread demands of accessibility and sustainability while still maintaining a sense of wonder, comfort and joy. In short, they can inspire designers of all ages, showing us what our world could be with a little more imagination.

Anastasia Sekalias received a Bachelor’s of Science in Architecture from the University of Illinois at Urbana-Champaign, where she is currently pursuing a Masters of Architecture. She is an avid fan of cinema including classic films, the works of Tim Burton, Wes Anderson and of course, Pixar.

Kathryn H. Anthony, Ph.D., is ACSA Distinguished Professor of Architecture at the School of Architecture at the University of Illinois at Urbana-Champaign. She has taught a graduate seminar in architecture, cinema, environment and behavior for the past four years and has co-authored two prior articles in Arch Daily with alumni from her course. 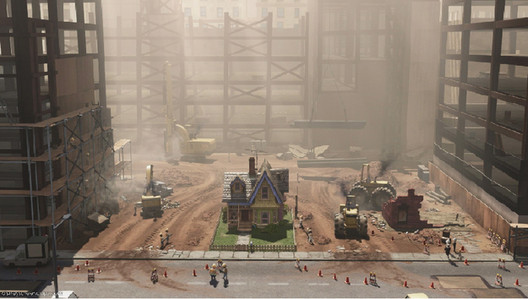