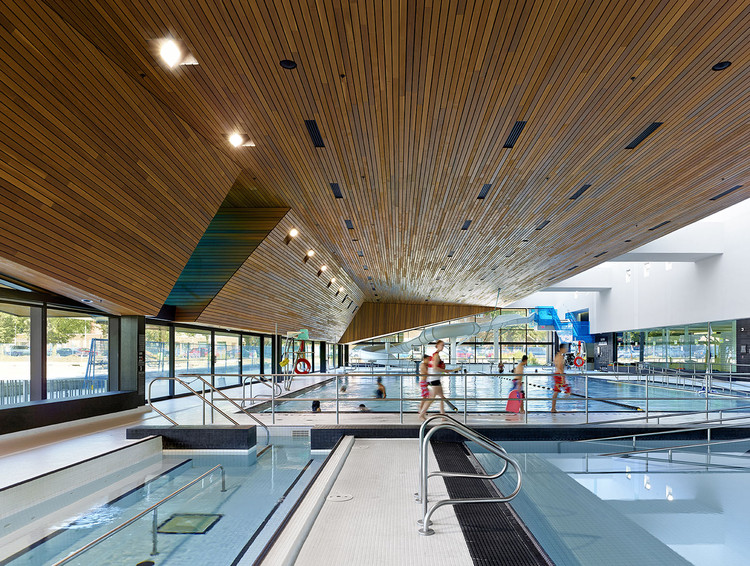 Text description provided by the architects. Located in downtown Toronto, Regent Park is Canada’s oldest and largest social housing project, built in the late 1940’s. The community has historically been viewed as a transitional community for new immigrants, but due to social and physical planning ills, has contributed to the concentration of a socially marginalized population. 41% of the population living in Regent Park are under 18, and over 70% of the population lives below the Low-Income Cut-Off Rate.

The 12 year Regent Park Revitalization project began in 2005 to redevelop the 69 acre community to be a vibrant mixed-use mixed-income community. The Regent Park Aquatic Centre, completed in 2012, is the key civic amenity centred on the eastern flank of the new central park development as the heart of the revitalization.

Regent Park Aquatic Centre has been conceived as a ‘Pavilion in the Park’, very open at the base, and bisected lengthwise by a ‘dorsal fin’ of aquatic hall sky-lighting. It is a multi-purpose swimming pool facility that includes a 25m, 6-lane pool, leisure pool, tot pool, hot tub, slide, tarzan-rope, and diving board. Replacing an existing outdoor pool, the project was mandated to capture a feeling of transparency and connection to the outdoors.

The Aquatic Centre is the first facility in Canada to adopt the singular use of universal changerooms, no longer separating males and females, rather common changerooms with private change cubicles; addressing cultural and gender identity issues, while also enhancing the openness, safety, and visibility throughout the complex.

The facility also has two double sliding glass doors off the main pool hall for sunbathing access to the park-side terrace. Responding to the views from the new high-rise towers surrounding the park, the building’s Green Roof is designed as a fifth elevation, integrating with the building features and park setting.

In the last three decades, Regent Park has become an immigrant settlement community. As such, the new Aquatic Centre offers a new level of accommodation with the addition of a complete system of aquatics hall screening for those cultural groups interested in privacy swims. The adoption of this new progressive feature along with the universal change rooms, the combination of fitness, leisure, and therapeutic aquatic uses, and the open and inviting design has greatly increased interest in the City’s aquatic venues.

This project typifies the design legacy commitment of the Regent Park revitalization program. The building is both sculptural and urban in its’ resolution as a park pavilion in a religious urban grid. The interior design is clean and simple in its’ resolution, open and inviting, and active and fun in use. This facility provides an important civic amenity to a once marginalized neighbourhood. 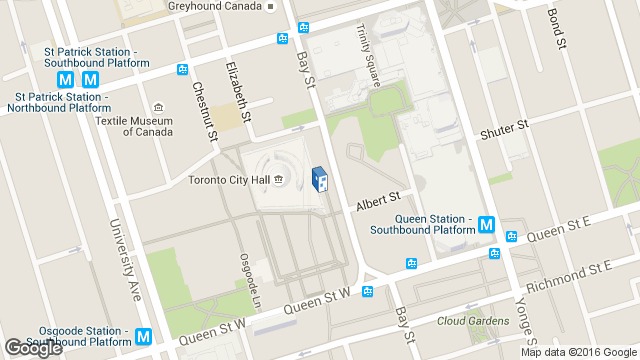 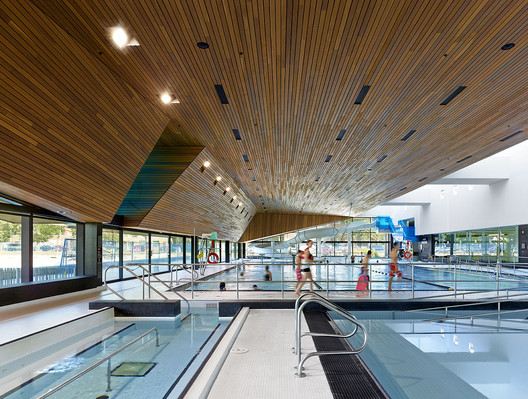