Competition organizer Ctrl+Space has announced the winners of its Istanbul Community Market Ideas Competition, which sought culturally relevant designs for a marketplace to be located in central Istanbul, Turkey.

Out of 138 entries, 10 finalists were selected, three of which went on to win first, second, and third prizes, reflecting the best displays of the jury’s qualifications: communication efficiency, technical quality, aesthetic quality, functionality, and relation to context. See the three winning designs, after the break.

With the needs of the site in mind, “Sprouting from the Ancients” focuses on the preservation of existing buildings, adding only lightweight and graphical arches to the protected archeological area. Thus, the site’s sense of history and memory remain in tact, while simultaneously constructing a new platform on which to build new memories for the community.

Utilizing an open concept, the design facilitates a flexible, multi-purpose open-air market that spans over multiple levels and creates a distinct sense of identity. 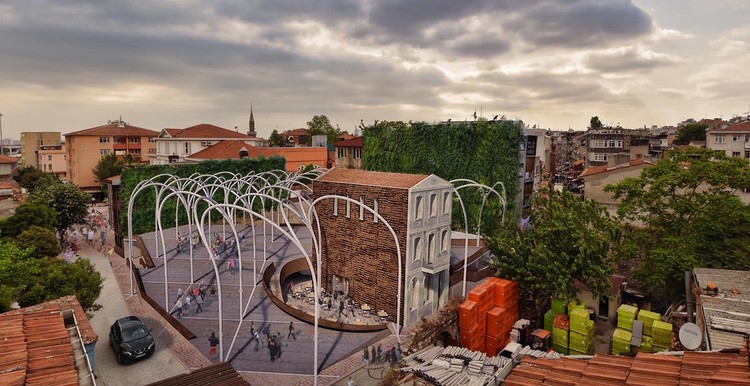 Following the example of some of Istanbul’s historic architecture, “The Inhabited Image” relied on mathematic models in order to shape its design and concept. Along with a simple, structurally efficient grid of box forms, the building’s exterior color is programmed to digitally replicate the imagery of the marketplace—“the vibrancy of the material resonates with the vibrancy of the market event, allowing maintenance of the energy of the market while occupancy fluctuates.”

Stratifying the market platform into a dynamic vertical space, “A Hanging Marketplace” creates a sense of community “by merging people and space through the formal and informal commercial activities that happen at the different platforms.”

With its independent structuring, the design conceptualizes a distinct spatial relationship via modules and platforms, creating a changing atmosphere throughout its entirety.

Learn more about the winners of the competition, as well as seven honorable mentions, here.