The Council on Tall Buildings and Urban Habitat (CTBUH) has announced the winner and finalists of its 2015 Urban Habitat Award. Launched in 2014, the Urban Habitat Award recognizes the contributions of tall buildings to the urban realm. The winners this year were chosen for influencing their environment and cultural context intelligently, adding social sustainability to their immediate site and wider context. See all of the finalists and the winner after the break.

The Chatswood Transport Interchange (CTI) is a mixed-use transit development project comprised of an upgraded rail station linking the North Shore and Chatswood to Epping lines; an open, landscaped bus interchange; 10,000 square meters of retail spaces at podium level; public pedestrian linkages reconnecting the center of Chatswood; and three towers accommodating 550 apartments. Part of an urban renewal establishing new streets and reinstating previously severed connections, the project demonstrates how transportation is affective of the health of a city as a whole.

d’Leedon’s is a concentration of residential towers with small footprints, creating abundant public space for residents and visitors at ground level. Each tower is angled such that the site is aligned with the existing streets beside it, drawing them into its development. The surrounding landscape includes water features, lush vegetation, plazas, athletic facilities, and green fields, enhancing the residents’ quality of life.

Built on a site in the Jing An district that, along with Shanghai overall, has recently shown rapid growth, Jing An Kerry Centre creates a flexible program, accommodating the area’s growing population and existing residents and users. This scheme is divided into distinct blocks that correspond to their different functions, including housing, retail, transit, and offices, with a large plaza to tie it together.

Located in the heart of La Défense, Tour Carpe Diem reconnects the raised esplanade – or “dalle” – that joins the Champs-Elysées to the surrounding city of Courbevoie. A monumental exterior staircase links the dalle to an adjacent neighborhood within Courbevoie, addressing La Défense’s need to integrate more with its surroundings.

Located in Singapore’s high-density city center, PARKROYAL on Pickering was selected as the winner of the 2015 Urban Habitat Award for its elevated gardens, which illustrate how greenery can not only be conserved, but multiplied vertically in a striking way. Inspired by terraced landscapes, including the culturally vital rice paddies, the building features a contoured podium that responds to the street. Outdoor plazas and gardens flow from exterior to interior, with the greenery from the nearby Hong Lim Park extended onto the building.

Read more about the finalists and winner, including their official CTBUH profiles, here. 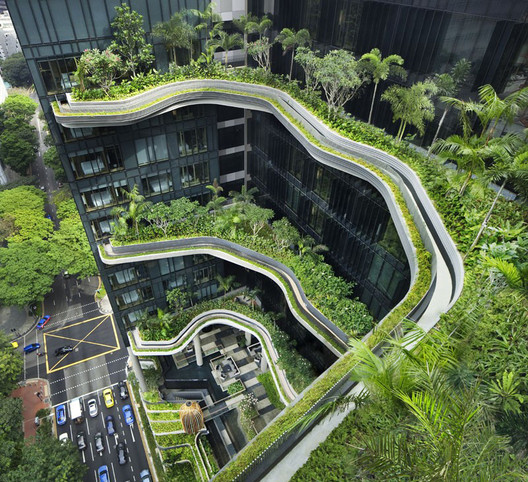