Save
'What is The Netherlands?' Exploring the World Expo at Rotterdam's Nieuwe Instituut
Share
Or
Copy 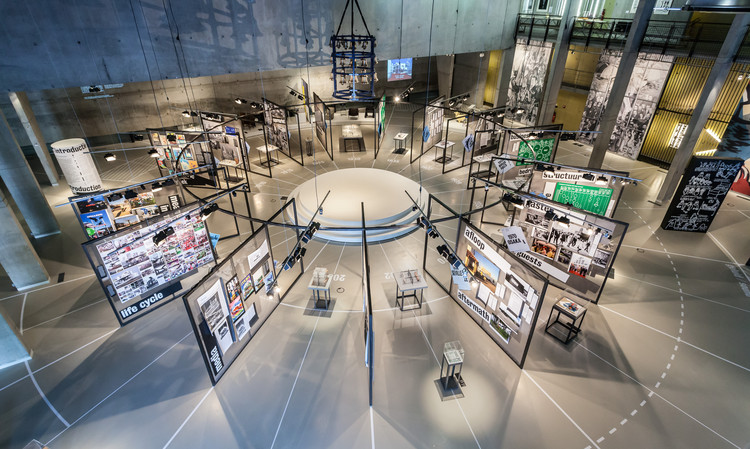 Since the war, Rotterdam has become a progressive cultural destination for art, architecture and music. In fact, businesses and residents of the city have already started to lobby to host the World Expo in 2025. Reflecting on this apparent impasse, What is The Netherlands? examines fourteen previous Dutch entries to World Expos held since 1910 (when the country's first pavilion was constructed in Brussels), through a collection of furniture, fragments and reconstructed pavilions. As curator Stephan Petermann describes it: "Each expo entry is a glance in the mirror, showing where the Netherlands was at at a particular point in history, where it wanted to be, and how this reality and desire can be displayed through an exhibition." This latent dialogue between "modernity and nationality, economy and image, corporate opportunism and collective ambitions" is transmitted through a circular framework based on Frédéric Le Play's plan for the 1867 World's Fair in Paris, "in which the fourteen historic Dutch entries each have an equal stake."

The effects of globalisation and national identity form the exhibition's undercurrent, evidence of which can be found in each pavilion on display; in this way it feels like a thematic distension of last year's Biennale in Venice. In 2013, OMA's Rem Koolhaas announced that his direction of the 2014 Biennale di Venezia would explore Absorbing Modernity, 1914-2014 in order to "show the erasure of national characteristics." Petermann, an AMO Associate at OMA, helped to realise Koolhaas' ideas. One of the suggestions that they gave participating nations was to look at their own national pavilions that were entered for international presentations as a way of understanding how their own countries had dealt with the rise (and collapse) of modernity. Although this latest exhibition is altogether more focused, the ideas it highlights validates this approach.

The inner ring of the circular exhibition focuses on the dialectic between governance and lyricism embedded in each Expo entry, while the second ring presents a selection of artefacts from each respective pavilion. Each section contains a modelled reconstruction of the pavilion – all displayed at the same scale – showing with intriguing clarity the successive development in size and design. The 'bureaucratic wall' features thematic sections concerning the political machinery behind each development: discussions on the purposes and intentions handed to designers, economic realities like the budgets, and diplomatic handiwork. The 'lyrical' side features a speculative highlight of that year – the most expressive paintings, sculpture, and films shown in the exhibition.

A chronology of chairs presents a brief history of Dutch seating at the World's Fair, featuring works by Mart Stam, Martin Visser, Marcel Wanders, and Maarten Baas. A striking highlight is a dark mahogany chair designed by Michel de Klerk in 1915, which was selected by the Dutch in favour of a design by Gerrit Rietveld for the 1925 Fair. The second ring contains other emblematic 'found objects' of Dutch innovation including a large scale political cartoon celebrating the Welfare State by Opland (1958), the mesmerising film Sky over Holland by John Fernhout (1967), a machine reproducing Dutch scent abroad by Woody van Amen (1970), and a five-metre tall Meccano windmill (1992).

The roof of the exhibition space features fourteen Dutch flags, one for each pavilion shown in the exhibition. They refer to reports in Dutch newspapers during the 1915 San Francisco World Fair commenting on "the excessive presence of flags on the Pavilion of The Netherlands." The symbolism of the overindulgent use of flags is not hyperbole. According to Petermann, "collectively the national entries show a persistent balancing act between Dutch modesty and arrogance: either in criticism for selling out (as in the case of the flags) or selling short, such as when in 1937 Holland apparently turns too modern to be recognisable as Holland."

An essential nationalistic history is concealed in its institutional development, which sees a clear acceleration in the wake of the first post-war Expo in 1958. Contrary to pre-war exhibitions, in which participation is mostly seen as a formal political obligation, an eagerness to express a new post-war condition appears: where invitations to participate are normally answered by the government at the last possible moment, the invitation to be part of the 1958 Brussels Expo receives an almost immediate positive answer.

Participation in the Expo is now a task taken on by the Prime-Minister’s office, not purely trade or arts related ministries which were in charge before the war. The result is a tour-de-force of Holland’s best on all levels: leading culture with Karel Appel and le Corbusier’s Poeme electronique, hard-core technology in immense advanced water engineering (just five years after the dramatic flooding of Zeeland) and explicit cartoons about the blessings of the welfare state by political cartoonist Opland. In the decades that follow the mood gradually turns from adventurous opportunism to more cliché driven and again obligatory presentations.

The current recession of the Expo is hidden in its political design. In an interview former Prime Minister Balkenende, who was iin charge of the 2010 Shanghai entry, argues for a clear separation between design and state. His conviction is echoed in the small contribution to the current Expo in Milan. Plagued by a short preparation time of only five months and very limited means, the Dutch sent a small parade of food trucks and a small carnival tent topped by a large cow to the Expo grounds. Its most revolutionary aspect is not in its design, but in its goal: trying to impress is not its main ambition.

The look in the mirror seems clear: the 'hipsteresque' coolness reflecting an uncertain government nervous of its real goals and position, and a cultural sector either bored or too overwhelmed by the presence of the market to effectively respond, becomes the marketing lingo of a gigantic cow. In an age of increasingly powerful cities and the market economy, the state is proportionally overlooked as a vehicle for societal progress. While their political legitimacy is heavily weakened they remain a valuable scale of force integrated in deeper and larger networks which so clearly extend our identities and offer platforms for solidarity. The current neglect of exhibiting misses out on its endless potential for forcing the articulation of a future, and therefore for progress.

The exhibition has been largely based on the research by Marie-Thérèse van Thoor on the Dutch entries to the World Expo from 1910-1958. It was curated by Stephan Petermann with exhibition design and concept development by Studio Mann and Marieke van den Heuvel. The graphic design was by Lu Liang with art direction by Maureen Mooren, and the design and production of the models on display was undertaken by Cédric van Parys, Laurence Bolhaar, and Emile Estourgie of AMO. Text was edited by Gert Staal and James Westcott, and the films were produced by Sophie van Leeuwen, Pieter-Bas van Wiechen and Frans Parthesius (Phosfor).

You can read an interview with Stephan Petermann about the exhibition here. The show, which is part of a triad of exhibitions on the theme of World Expos, is available to view until the 23rd August 2015.