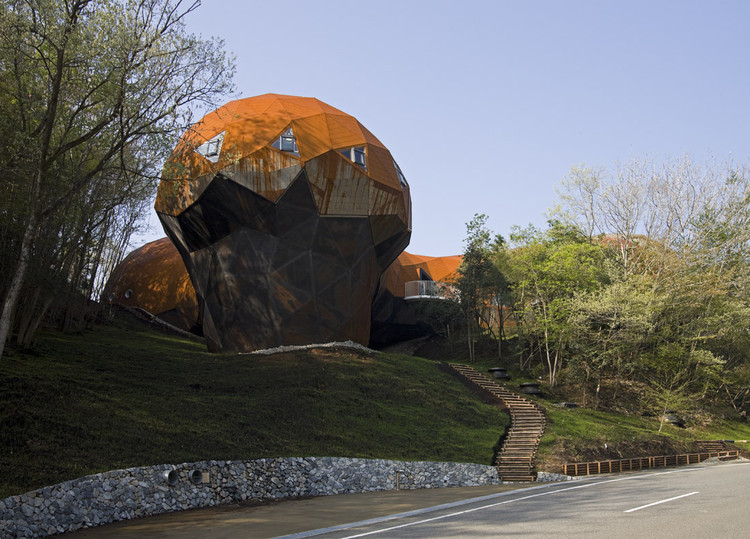 Text description provided by the architects. The client requested that all people who will visit this place including the inhabitants of Hyogo prefecture, improves the interest for global environmental concerns and be able to experience various approaches as the place of environmental study.

We thought about creating the new environment architectural space that could share the point of contact with nature and environment providing a keyword called "the circulation" in a relation with nature for the request.

The site is on the steep slope of the north side in the forest. After integrating all functions that the client requested at the design term into three, required area and volume were set according to the function and structure. The two functions were arranged in parallel on flat land (old town road was there) that had remained at a high level in the site, and another was arranged having floated from the slope at the same level of other two. This is because it is assumed very important to make use of the limited flat land, keep natural landform as large as possible, and to minimize the influence of construction against peripheral natural environment. The form of the building shows the rational shape that connects these three functions for plane and section.

Japanese cypress thinning wood log that is used for superstructure is provided with the intention of realizing the light structure as well as standardizing and improving the work efficiency of the timber using, and to fix the amount of CO2 emission. The weather resistance steel board of 1.2mm thickness is used for outside roof and wall finish. This steel board shows the characteristic that doesn't rust any more after stabilizing process of the initial rust.

Moreover, we tried to green a roof and wall partially applying moss that grows by moisture on an atmospheric inside and turf that grows on the soil containing high retentivity of water.

The material was chosen not only for the characters of the maintenance free or the low maintenance but also of the quality that acquires the form the oneness with a natural spectacle obtaining the expression of architecture that cooperates with the natural environment that changes and grows up.

（From basics to floor）for the structure of under part, 16 Deep Foundations of 1.5m in diameter are adopted, to minimize the influence of the construction against peripheral natural environment. The part of the building that touches the ground is RC structure and composed underground beam, and the part of the building that floating from the ground is SRC structure which used a steel frame together. They are connected and composed footing beam. And the floating part with underground beam is supported by the building frame of RC that is also used as a water tank for fire prevention.（It is the upper part from the floor）For the superstructure, the single-layered three-dimensional truss structure which is made out of Japanese cedar thinning wood log and ready-made hardware covers the space for one body. This truss had been begun to be assemble in every three main building space. On the nearest flat land (a yard), a set of truss which has 2-3 logs with one joint parts and has composed already on the ground was lifted with a crane, and connected by human power. The rooms such as a waiting room or the office which are arranged in the space of the truss constitute are composed with general RC wall-type structure and steel-frame structure. 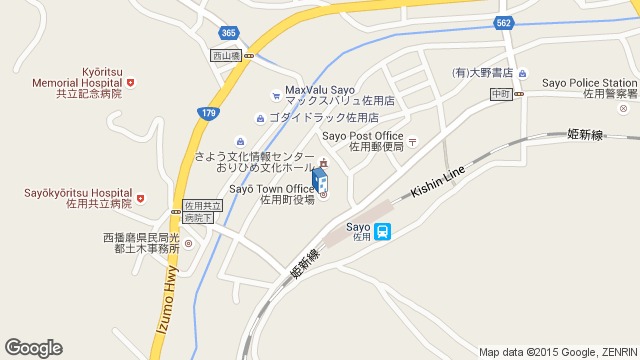