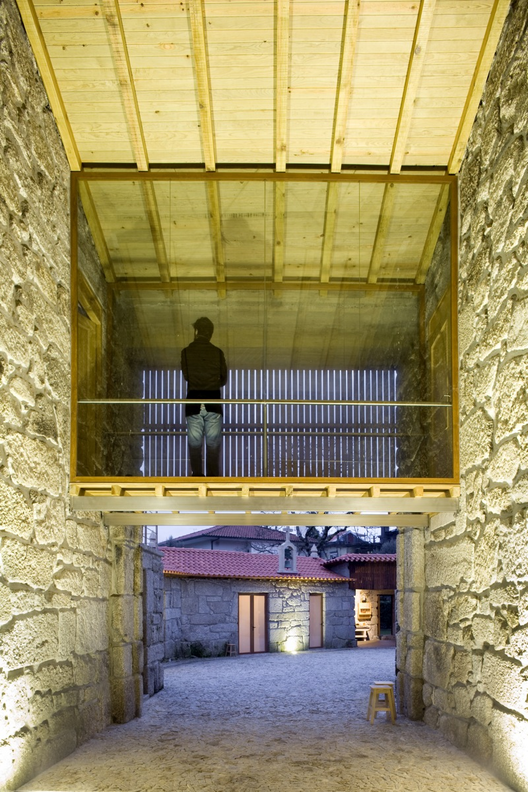 Text description provided by the architects. Recovery of the traditional and regional heritage

Inserted in the distinctive nature of Minho, Senra´s House is a living example of the rustic countryside heritage in Portugal.

The actual unifamiliar residence – exclusively made by three materials: wood, stone and ceramic -, is a project signed by the Portuguese architect Manuel Ribeiro, developed in the same field of agricultural production, where before, houses, courts, mill and wine cellar existed together.

“…All the functionality of the project works out in turn of a pre-existing square, where in the past, there was a hard-pack floor, the access to bullock carts and housing, keeping alive the memory of the stone pavement quartered, the green space around the house, the public spaces to the north, and other oldest references”, refers the architect Manuel Ribeiro.

The construction of the main functional body (housing), emerges in a valley, deliberately aligned with the Sun, ensuring that the building benefits from sunlight, since the source to the west, protecting as well the area of the square from the weather.

All the interior space reveals new features through the adaptation of old structures and deployment of a new system of coverage in wooden trusses.

“… Having the intention to preserve the formal identity, it was decided to keep the windows in its original model, even in the toilets in order to play in various forms with the light of the interior and exterior ...”, justifies Manuel Ribeiro.

It should be noted, moreover, that on the level of sustainability, the new building has efficient use of natural resources and renewable energy, such as: LED lights or eco-efficient; heating system boiler mixture of pellets; solar panel and the fireplace or the stove.