The Architectural Review (AR) has crowned David Chipperfield's Fayland House winner of the 2015 AR House Awards, deeming it the world's best new house. Celebrating excellence and innovation in the design of a one-off house, the award highlights the Chipperfield-designed home for being a "radical new take on the English country house."

"To make a luxury home that isn’t pompous or a projection of the vanity of its inhabitants is a really difficult thing," said judge Adam Caruso of Caruso St John. "Fayland House places a very large house in a special landscape without disappearing. The domestic outdoor spaces, which have always been an issue in English country houses, are in courtyards, which is an innovation."

Located on a lush hillside site in Buckinghamshire, the 888-square-meter, single-story home is organized by a loggia that spans the length of the house and connects the living spaces and interior courtyards to the surrounding landscape.

"That colonnade in the front and the way it modulates the scale on the landscape is very interesting," adds judge Sofia von Ellrichshausen of Pezo von Ellrichshausen. " It also seems to be very rigid from the outside, but the plan is a lot less obvious, offering differing levels of privacy, and arranged around courtyards. The fact that Chipperfield has a large office but can still maintain a high level of quality in a small-scale project is a lesson, of course."

Read the AR's full review on the Fayland House, here. 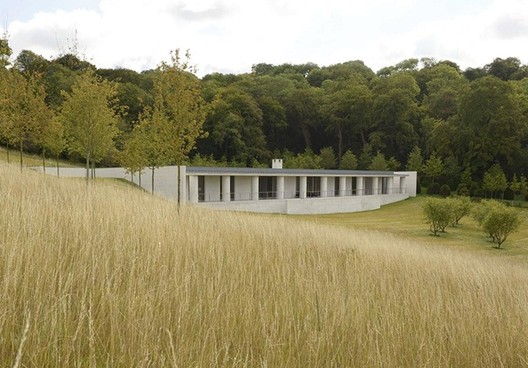